It is well-documented that when blindfolded, people find it impossible to walk (or drive) in a straight line.

It is also well-documented that as cult leaders amass larger followings they often cultivate an increasingly bizarre and grandiose persona, evident in their own unique attire — a blend of the imperial, exotic or even extra-terrestrial. 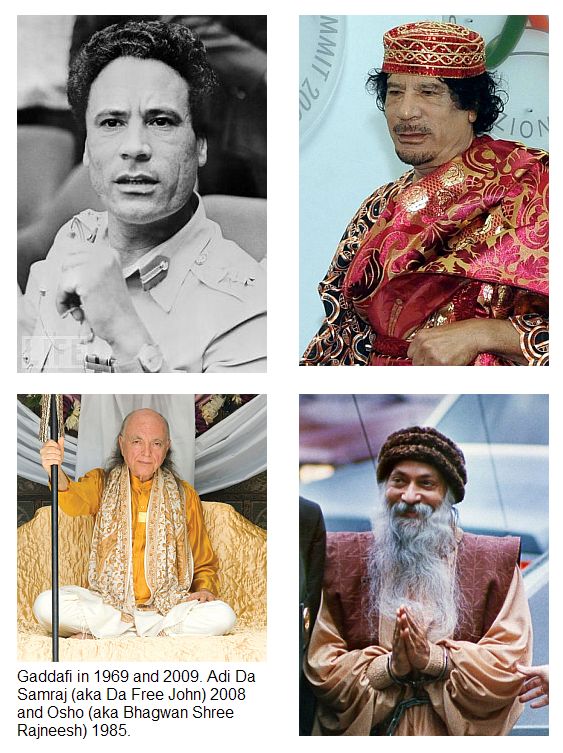 So how did Gaddafi go from being a dapper young army officer to a would-be pan-African emperor?

By wearing a blindfold, so to speak.

The self-tied blindfold that sends cult leaders along a spiral path of deviation is adulation and uncritical attention from their followers. There are no countervailing forces which might temper the leader’s expanding grandiosity. There are no independent voices to warn the emperor that his sense of style has drifted towards wild eccentricity. The mutually reinforcing power of group-think places both leader and followers in a bubble sealed off from reality.

Now here’s the interesting thing: this human inclination to physically or figuratively deviate from a straight course when the individual is deprived of corrective input from external and independent sources is an adaptive tendency.

How so? Unlike aircraft that can safely employ an autopilot in the relatively predictable environment of high altitude, we operate in highly unpredictable, rapidly changing surroundings. We need autopilots that have a built-in need to be overridden. The more comfortable we become in a blindfold, the more certain we will run into trouble.