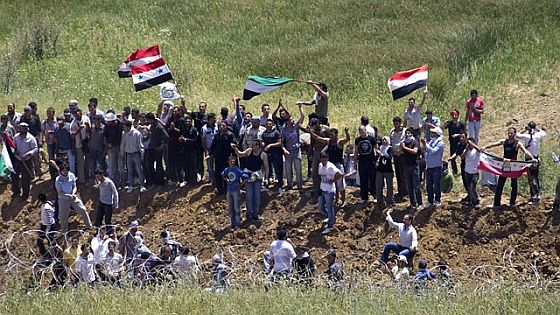 Israeli troops opened fire as protesters from Syria stormed a ceasefire line in the Golan Heights, killing 14 of the demonstrators.

Hundreds of protesters rushed towards the ceasefire line, cutting through a line of barbed wire as they tried to head into the Golan Heights in a repeat of demonstrations last month that saw thousands mass along Israel’s north.

Similar protests were held in the West Bank, where hundreds demonstrated at Qalandia checkpoint near Ramallah, and in the Gaza Strip, where several hundred more gathered in the north of the coastal enclave.

In Majdal Shams, on the occupied Golan, Israeli troops opened fire as demonstrators sought to push through the mined ceasefire line, which had been reinforced with several rows of barbed wire blocking access to a fence.

“Despite numerous warnings, both verbal and later warning shots in the air, dozens of Syrians continue to approach the border and IDF (Israel Defence Forces) forces were left with no choice but to open fire towards the feet of protesters in efforts to deter further actions,” an army spokesman told AFP.

Updating an earlier toll, Syrian state media reported that 14 people were killed, including a woman and child, and more than 220 wounded. The Israeli military said it was aware of 12 casualties, but gave no more details.

Uri Avneri, former MK and activist with Gush Shalom left-wing organization, said Sunday that the IDF used excessive force against the protesters in the Golan Heights. “The trigger-happy behavior stands out in particular when compared to the softness with which violent settlers are treated,” he said.

Avneri conceded that a country has a right to defend its borders and prevent illegal entrance to its territory, yet added that “in order to effectively protect its borders, the state should first know where its borders are and have them recognized by the international community – and this is a decision which Israel has been avoiding for years.”

“A state that trespasses its neighbors’ borders, steals their land and erects settlements on them will have a hard time justifying actions taken to protect its own borders,” Avneri said. “Contrary to what Prime Minister Netanyahu says, only a recognized and agreed upon international border – that is, a border based on the 1967 lines – is a defensible border.”