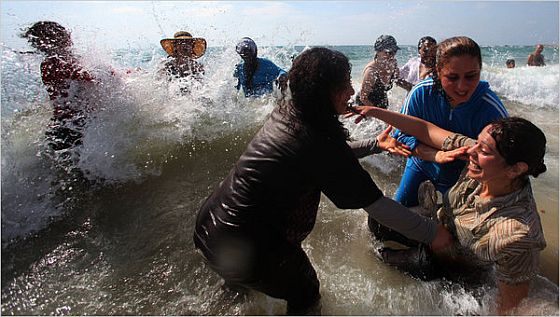 Skittish at first, then wide-eyed with delight, the women and girls entered the sea, smiling, splashing and then joining hands, getting knocked over by the waves, throwing back their heads and ultimately laughing with joy.

Most had never seen the sea before.

The women were Palestinians from the southern part of the West Bank, which is landlocked, and Israel does not allow them in. They risked criminal prosecution, along with the dozen Israeli women who took them to the beach. And that, in fact, was part of the point: to protest what they and their hosts consider unjust laws.

In the grinding rut of Israeli-Palestinian relations — no negotiations, mutual recriminations, growing distance and dehumanization — the illicit trip was a rare event that joined the simplest of pleasures with the most complex of politics. It showed why coexistence here is hard, but also why there are, on both sides, people who refuse to give up on it.

“What we are doing here will not change the situation,” said Hanna Rubinstein, who traveled to Tel Aviv from Haifa to take part. “But it is one more activity to oppose the occupation. One day in the future, people will ask, like they did of the Germans: ‘Did you know?’ And I will be able to say, ‘I knew. And I acted.’ ”

Such visits began a year ago as the idea of one Israeli, and have blossomed into a small, determined movement of civil disobedience.