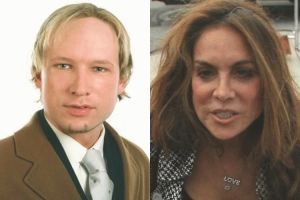 In June 2007, “counter-jihad” blogger Pamela Geller posted the following Email from Norway, from a reader who sounds a lot like the Oslo terrorist, Anders Behring Breivik.

I am running an email I received from an Atlas reader in Norway. It is devastating in its matter-of-factness.
[The email begins] Well, yes, the situation is worsening. Stepping up from 29 000 immigrants every year, in 2007 we will be getting a total of 35 000 immigrants from somalia, iran, iraq and afghanistan. The nations capital is already 50% muslim, and they ALL go there after entering Norway. Adding the 1.2 births per woman per year from muslim women, there will be 300 000+ muslims out of the then 480 000 inhabitants of that city.

Orders from Libya and Iran say that Oslo will be known as Medina at the latest in 2010, although I consider this a PR-stunt nevertheless it is their plan.

From Israel the hordes clawing at the walls of Jerusalem proclaim cheerfully that next year there will be no more Israel, and I know Israel shrugs this off as do I, and will mount a strike during the summer against all of its enemies in the middle east. This will make the muslims worldwide go into a frenzy, attacking everyone around them.

The email Geller had received, continued:

We are stockpiling and caching weapons, ammunition and equipment. This is going to happen fast.

Geller subsequently deleted these lines, and as Johnson and others have established, she deleted them after Breivik’s July 22 bombing and shooting rampage.

If Geller was knowingly in communication with Breivik then she should probably be helping Norwegian authorities with their investigation.

But even if neither in this instance nor any other did she communicate with him, the contents of the email that Johnson has unearthed are no less damning. They suggest that far from condemning those individuals in Norway who she knew were preparing for armed violence, she chose to showcase their plans as though to say, “we’re with you.”

Update: This afternoon, Geller responded to Johnson’s post and acknowledges that after the massacre she removed the sentence from her 2007 post “as I found it insenstive [sic] and inappropriate.” She also says her email correspondent was not Breivik.

The sentence I edited is not an incitement to anything. It refers to self-defense, but I removed it in the light of recent horrific events in Norway. I thought it insensitive. Nothing more.

Everyone has a right to self-defense.

There are no doubt many members of armed militias across America who share Geller’s view that anyone has the right to stockpile weapons, ammunition and equipment in preparation for “self-defense” against the US government, enemies of the White race, Muslims, Jews or whatever groups or entities they happen to have demonized.

Such militias and the philosophies they espouse provide a breeding ground for the kind of paranoia that on occasions results in mass murder.

6 thoughts on “Pamela Geller’s ties to violence in Norway”