The New York Times reports on the driving force behind the anti-Shariah movement that has drummed up hysterical opposition to the proposed Islamic center near “ground zero” in New York City and inspired the passage or consideration of anti-Muslim laws in several states. 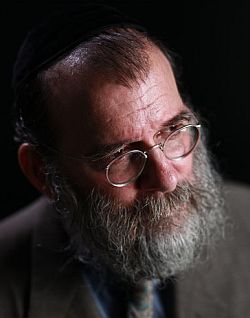 [The movement] is the product of an orchestrated drive that began five years ago in Crown Heights, Brooklyn, in the office of a little-known lawyer, David Yerushalmi, a 56-year-old Hasidic Jew with a history of controversial statements about race, immigration and Islam. Despite his lack of formal training in Islamic law, Mr. Yerushalmi has come to exercise a striking influence over American public discourse about Shariah.

Working with a cadre of conservative public-policy institutes and former military and intelligence officials, Mr. Yerushalmi has written privately financed reports, filed lawsuits against the government and drafted the model legislation that recently swept through the country — all with the effect of casting Shariah as one of the greatest threats to American freedom since the cold war.

The message has caught on. Among those now echoing Mr. Yerushalmi’s views are prominent Washington figures like R. James Woolsey, a former director of the C.I.A., and the Republican presidential candidates Newt Gingrich and Michele Bachmann, who this month signed a pledge to reject Islamic law, likening it to “totalitarian control.”

Yet, for all its fervor, the movement is arguably directed at a problem more imagined than real. Even its leaders concede that American Muslims are not coalescing en masse to advance Islamic law. Instead, they say, Muslims could eventually gain the kind of foothold seen in Europe, where multicultural policies have allowed for what critics contend is an overaccommodation of Islamic law.

“Before the train gets too far down the tracks, it’s time to put up the block,” said Guy Rodgers, the executive director of ACT for America, one of the leading organizations promoting the legislation drafted by Mr. Yerushalmi.

The more tangible effect of the movement, opponents say, is the spread of an alarmist message about Islam — the same kind of rhetoric that appears to have influenced Anders Behring Breivik, the suspect in the deadly dual attacks in Norway on July 22. The anti-Shariah campaign, they say, appears to be an end in itself, aimed at keeping Muslims on the margins of American life.

Yerushalmi has not only actively promoted his conspiratorial vision of Shari’a law, but has also sought to portray all Muslims as a threat. In one March 2006 article, for example, Yerushalmi even went so far as to claim that “Muslim civilization is at war with Judeo-Christian civilization…The Muslim peoples, those committed to Islam as we know it today, are our enemies.”

That same year, Yerushalmi founded the Society of Americans for National Existence (SANE), a “think tank” that has published anti-Muslim, anti-immigration and anti-black materials, as well as New World Order-style conspiracy theories. In 2007, SANE, declaring itself “dedicated to the rejection of democracy and party rule and a return to a constitutional republic [of the original founders of the US],” launched a campaign fueled by suspicion of all Muslims.

That campaign, “Mapping Shari’a in America: Knowing the Enemy,” sought to determine exactly what type of Shari’a every single mosque and Muslim religious institution in the U.S. was advocating. A June 2007 press release announcing the campaign indicated that SANE would work to “test the proposition that Shari’a amounts to a criminal conspiracy to overthrow the U.S. government” by investigating and ranking the adherence to Islamic law of mosques and their associated day-schools throughout the U.S. The statement also promised to “advocate for the criminalization of Shari’a” if it felt its targeted investigation into mosques and Islamic day schools proved such a measure necessary.

SANE also proposed legislation that furthering or supporting adherence to Shari’a “shall be a felony punishable by 20 years in prison.” It called on Congress to declare war on the “Muslim nation,” which it defined as “Shari’a-adherent Muslims,” and further asked Congress to define Muslim illegal immigrants as alien enemies “subject to immediate deportation.”

Yerushalmi has suggested that Caucasians are inherently more receptive to republican forms of government than blacks—an argument that’s consistent with SANE’s mission statement, which emphasizes that “America was the handiwork of faithful Christians, mostly men, and almost entirely white.” And in an article published at the website Intellectual Conservative, Yerushalmi, who is Jewish, suggests that liberal Jews “destroy their host nations like a fatal parasite.” Unsurprisingly, then, Yerushalmi offered the lone Jewish defense of Mel Gibson, after the actor’s anti-Semitic tirade in 2006. Gibson, he wrote, was simply noting the “undeniable Jewish liberal influence on western affairs in the direction of a World State.”

As the New York Times notes, the movement that Yerushalmi has helped inspire is the same movement that shaped the thinking of Norwegian killer Anders Behring Breivik.

The Oslo perpetrator in his manifesto quoted extensively from the writings of European and American bloggers — including Robert Spencer and Pamela Geller — who promote a conspiratorial anti-Muslim agenda under the pretext of fighting radical Islam. Because of the reach of the Internet, these ideas float freely across borders and are reinforced by like-minded bigots.

This belief system goes far beyond anti-Islamic prejudice based on simple religious or racial grounds. In a sense, it parallels the creation of an ideological — and far more deadly — form of anti-Semitism in the late 19th and early 20th centuries on the backs of the previously dominant cultural and religious forms of anti-Semitism.

Pamela Geller, who in recent days has been struggling to distance herself from Brievik, has no qualms about celebrating her connection to Yerushalmi. He is, she says, “a man I consider a national treasure…” He is also her attorney.

2 thoughts on “David Yerushalmi: the White supremacist lawyer leading the anti-Sharia crusade in the US”