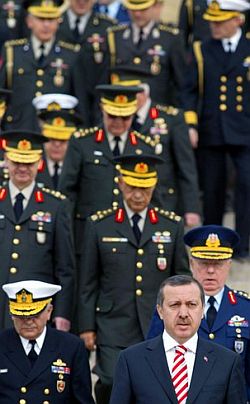 Fifty years ago, when a populist prime minister tangled with the Turkish military, he ended up on the gallows, the mandate of three election victories little consolation. This time around, the rivalry climaxed with most of Turkey’s military command resigning simultaneously, its leader complaining of powerlessness and bad press.

As Turks grappled Saturday with the shock of the resignations — and an extraordinary moment in modern Turkey’s history — officials scrambled to project a facade of business as usual, even as their critics warned of a creeping authoritarianism engineered by Prime Minister Recep Tayyip Erdogan, who has governed since 2003.

But in broader ways, the resignations on Friday delivered Mr. Erdogan a perch to reshape a military bound by civilian control, pursue a foreign policy emboldened by the decisive victory of his conservative and populist party in elections in June and pursue constitutional changes that could transform politics here.

The struggle that has posed the most serious danger to Mr. Erdogan — a powerful military willing to act above the law — in many ways appears to have come to an end.

“The days of Turkey’s military calling the shots are over,” said Cengiz Candar, a prominent columnist. “There’s a new equation in the politics of the country, and anyone depending on the military to score points on a political issue has to forget about it.”