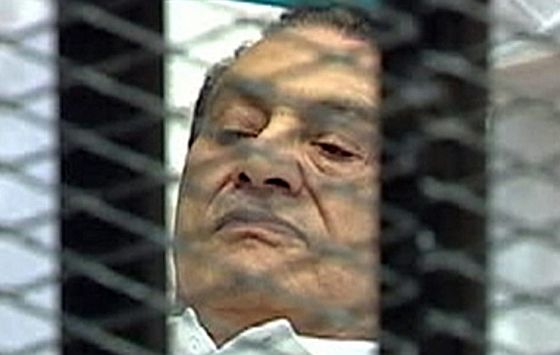 In downtown Cairo on Wednesday morning, people huddled around television sets to watch an historical moment unfold as former President Hosni Mubarak, his two sons Gamal and Alaa, and former Interior Minister Habib al-Adly faced trial on charges of murder for killing protesters during the 18-day uprising that led to Mubarak’s resignation.

Their gazes were glued to the TV screens in disbelief as they watched the dictator who ruled them for 30 years lying on a hospital bed inside a cage, wearing the white uniform of a defendant.

In a car parts shop downtown, a dozen people stood chatting and waiting in anticipation. When the former president appeared on screen, the observers cheered. Then suddenly quiet fell on the shop. As the employees of the shop and passersby watched the trial, they demanded complete silence, asking anyone who talked to remain quiet.

Many around Cairo expressed joy that some kind of real justice is being served.

“This is a historic day,” said Islam Khalil, a 28-year-old lawyer. “It shows progress and development of our country. I feel that I took my right and the rights of all those who have been living under his suppression.”

Mostafa, who owns a clothing shop in Bab al-Louk, agreed. “Glimpses of justice are finally starting to show in the country. I do not feel sorry for him. If someone stole LE 100 from you, would you be sorry for that person? What if he stole a whole country?” he said.

The sheer symbolism of the day made it one of the most visceral episodes in modern Arab history. In a region whose destiny was so long determined by rulers who deemed their people unfit to rule, one of those rulers was being tried by his public. On this day, the aura of power — uncontested and distant — was made mundane, and Mr. Mubarak, dressed in white and bearing a look some read as disdain, was humbled.

“Sir, I am present,” Mr. Mubarak replied into a microphone, from his bed.

“You heard the changes that the prosecutor made against you,” the judge said from the podium. “What do you say?”

“I deny all these accusations completely,” he replied, wearily waving his hand.

Then he handed the microphone to his son, Gamal.

The trial began precisely at its start time, 10 a.m. in Cairo. While the other defendants took a seat, Mr. Mubarak’s sons remained standing, the youngest, Gamal, seeming to block the view of his father from the cameras in the courtroom. Mr. Mubarak appeared tired but alert, occasionally speaking with his sons, who both held Korans.

As Mr. Mubarak denied the charges in the proceedings, which were broadcast on a large-screen television outside the police academy, his opponents gathered there roared in disapproval.

“Then who did it?” some asked.

The scene was tumultuous there on a sun-drenched parking lot, with a few dozen of Mr. Mubarak’s supporters sharing space with his opponents. At times, they scuffled; in intermittent clashes, the two sides threw rocks at each other. As Mr. Mubarak arrived at the courtroom, some of his supporters cried, waving pictures that read, “The insult to Mubarak is an insult to all honorable Egyptians.” Others shouted adulation at the screen.

“We love you, Mr. President,” some chanted.

Those sentiments were overwhelmed by the denunciations of his critics, in a trial that seemed to incarnate all the frustrations and degradations of a state that treated its people as rabble. Someone was finally being held to account, many said Wednesday.