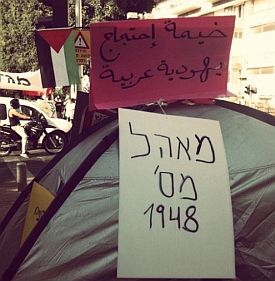 If you are Palestinian, it will be difficult to find anything to identify with in Tel Aviv’s tents’ city, until you reach Tent 1948. My first tour there was a few days ago, when I decided to join Tent 1948. Tent 1948’s main message is that social justice should be for all. It brings together Jewish and Palestinian citizens who believe in shared sovereignty in the state of all its citizens.

For me, as Palestinian, I don’t feel part of the July 14 movement, and I’m not there because I feel part, almost every corner of this encampment reminds me that this place does not want me. My first tour there was pretty depressing, I found lots of Israeli flags, a man giving a lecture to youth about his memories from ’48 war’ from a Zionist perspective, another group marching with signs calling for the release of Gilad Shalit, another singing Zionist songs. This is certainly not a place that the 20% of the population would feel belong to. The second day I found Ronen Shuval, from Im Tirtzu, the extreme right wing organization giving a talk full of incitement and hatred to the left and human rights organizations. Settlers already set a tent and were dancing with joy.

The existence of Tent 1948 in the encampment constitutes a challenge to people taking part in the July 14 movement. In the first few days, the tent was attacked by group of rightwing activists, who beat activists in the tent and broke down the Palestinian flag of the tent. Some of the leaders of the July 14 movement have said clearly that raising core issues related to Palestinian community in Israel or the occupation will make the struggle “lose momentum”. They often said the struggle is social, not political, as if there was a difference. They are afraid of losing supporters if they make Palestinian issues bold.

The truth is that this is the truth.

The truth is, this is exactly what might help Netanyahu, if he presses the button of fear, recreates the ‘enemy’ and reproduce the ‘security threat’, he might be able to silence this movement. The problem is not with Netanyahu, he is not the first Israeli leader to rely on this. The main problem is that Israelis are not ready yet to see beyond the walls surrounding them.