For the past two centuries and more, life in Britain has been governed by a simple concept: tomorrow will be better than today. Black August has given us a glimpse of a dystopia, one in which the financial markets buckle and the cities burn. Like Scrooge, we have been shown what might be to come unless we change our ways.

There were glimmers of hope amid last week’s despair. Neighbourhoods rallied round in the face of the looting. The Muslim community in Birmingham showed incredible dignity after three young men were mown down by a car and killed during the riots. It was chastening to see consumerism laid bare. We have seen the future and we know it sucks. All of which is cause for cautious optimism – provided the right lessons are drawn.

Lesson number one is that the financial and social causes are linked. Lesson number two is that what links the City banker and the looter is the lack of restraint, the absence of boundaries to bad behaviour. Lesson number three is that we ignore this at our peril.

Another great week for Corporate America!

The economy is flatlining. Global financial markets are in turmoil. Your stock price is down about 15 percent in three weeks. Your customers have lost all confidence in the economy. Your employees, at least the American ones, are cynical and demoralized. Your government is paralyzed.

Want to know who is to blame, Mr. Big Shot Chief Executive? Just look in the mirror because the culprit is staring you in the face.

You helped create the monsters that are rampaging through the political and economic countryside, wreaking havoc and sucking the lifeblood out of the global economy. 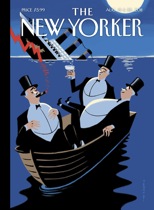 Did you see this week’s cartoon cover of the New Yorker? That’s you in top hat and tails sipping champagne in the lifeboat as the Titanic is sinking. Problem is, nobody thinks it’s a joke anymore.

Did you presume we wouldn’t notice that you’ve been missing in action? I can’t say I was surprised. If you’d insisted on trotting out those old canards again, blaming everything on high taxes, unions, regulatory uncertainty and the lack of free-trade treaties, you would have lost whatever shred of credibility you have left.

My own bill of particulars begins right here in Washington, where over the past decade you financed and supported the growth of a radical right-wing cabal that has now taken over the Republican Party and repeatedly made a hostage of the U.S. government.

When it started out all you really wanted was to push back against a few meddlesome regulators or shave a point or two off your tax rate, but you were concerned it would look like special-interest rent-seeking. So when the Washington lobbyists came up with the clever idea of launching a campaign against over-regulation and over-taxation, you threw in some money, backed some candidates and financed a few lawsuits.

The more successful it was, however, the more you put in — hundreds of millions of the shareholders’ dollars, laundered through once-respected organizations such as the Chamber of Commerce and the National Association of Manufacturers, phoney front organizations with innocent-sounding names such as Americans for a Sound Economy, and a burgeoning network of Republican PACs and financing vehicles. And thanks to your clever lawyers and a Supreme Court majority that is intent on removing all checks to corporate power, it’s perfectly legal.

Our leaders have asked for “shared sacrifice.” But when they did the asking, they spared me. I checked with my mega-rich friends to learn what pain they were expecting. They, too, were left untouched.

While the poor and middle class fight for us in Afghanistan, and while most Americans struggle to make ends meet, we mega-rich continue to get our extraordinary tax breaks. Some of us are investment managers who earn billions from our daily labors but are allowed to classify our income as “carried interest,” thereby getting a bargain 15 percent tax rate. Others own stock index futures for 10 minutes and have 60 percent of their gain taxed at 15 percent, as if they’d been long-term investors.

These and other blessings are showered upon us by legislators in Washington who feel compelled to protect us, much as if we were spotted owls or some other endangered species. It’s nice to have friends in high places.

Last year my federal tax bill — the income tax I paid, as well as payroll taxes paid by me and on my behalf — was $6,938,744. That sounds like a lot of money. But what I paid was only 17.4 percent of my taxable income — and that’s actually a lower percentage than was paid by any of the other 20 people in our office. Their tax burdens ranged from 33 percent to 41 percent and averaged 36 percent.

If you make money with money, as some of my super-rich friends do, your percentage may be a bit lower than mine. But if you earn money from a job, your percentage will surely exceed mine — most likely by a lot.

To understand why, you need to examine the sources of government revenue. Last year about 80 percent of these revenues came from personal income taxes and payroll taxes. The mega-rich pay income taxes at a rate of 15 percent on most of their earnings but pay practically nothing in payroll taxes. It’s a different story for the middle class: typically, they fall into the 15 percent and 25 percent income tax brackets, and then are hit with heavy payroll taxes to boot.

Back in the 1980s and 1990s, tax rates for the rich were far higher, and my percentage rate was in the middle of the pack. According to a theory I sometimes hear, I should have thrown a fit and refused to invest because of the elevated tax rates on capital gains and dividends.

I didn’t refuse, nor did others. I have worked with investors for 60 years and I have yet to see anyone — not even when capital gains rates were 39.9 percent in 1976-77 — shy away from a sensible investment because of the tax rate on the potential gain. People invest to make money, and potential taxes have never scared them off. And to those who argue that higher rates hurt job creation, I would note that a net of nearly 40 million jobs were added between 1980 and 2000. You know what’s happened since then: lower tax rates and far lower job creation.

3 thoughts on “We’ve been warned: the system is ready to blow”