The temperature may have dropped a little in Jerusalem on Wednesday night, but it was more than compensated for by the heat produced by Glenn Beck as he brought his “Restoring Courage” rally to the Old City.

The former Fox News presenter and devout Mormon stood at a podium beneath the gunmetal grey of the dome of the al-Aqsa mosque to direct a tirade of invective at governments, human rights organisations, the United Nations, Europe and Arab states – and sometimes just “them”, whoever they are.

Despite a strangely subdued start, the rightwing polemicist finally roused his audience to whoops and cheers after a strangely subdued initial response with his trademark preacher’s inflection. But all the while, the distant noise of anti-Beck protests provided a backdrop to a 90-minute programme of declamation, music and presentations.

Dressed as though attending a funeral, Beck stood in sharp contrast to the casual attire of his overwhelmingly white American Christian audience, many of whose baseball caps and T-shirts denoted their state of origin, their church or their adherence to the US Tea Party movement.

But the surprising number of empty seats belied the organisers’ claims that demand for tickets had outstripped availability at the 2,000-capacity Davidson Centre. 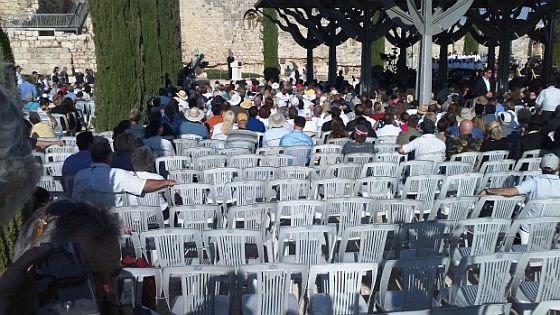 After months of preparations, hours of television and radio talk all geared up for the big day, tons of merchandise manufactured, Glenn Beck could just about muster over a thousand people at his “Restoring Courage” last night in Jerusalem.

I can’t help but think that this flop might be a lethal blow for this guy. After getting kicked out of FOX and then his decision to veer even farther to the right by partnering up with the likes of Pastor John Hagee, Beck seems to have lost any chance whatsoever to get back into mainstream America like he was just months ago.

Even the event a few days earlier in Caesarea had more umph in it than this one. In fact, he barely even cried in this one. I think he might have been shedding the real tears back stage.