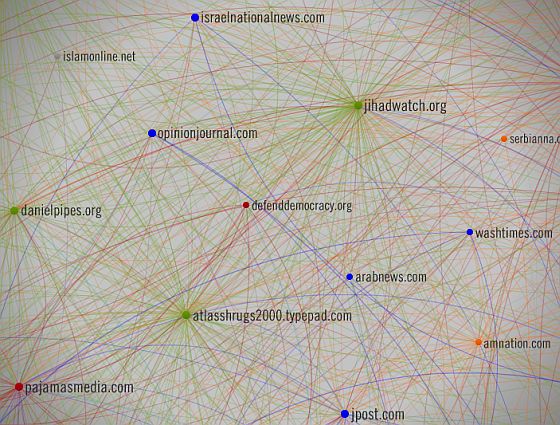 Anders Breivik’s manifesto reveals a subculture of nationalistic and Islamophobic websites that link the European and American far right in a paranoid alliance against Islam and is also rooted in some democratically elected parties.

The Guardian has analysed the webpages he links to, and the pages that these in turn link to, in order to expose a spider web of hatred based around three “counter-jihad” sites, two run by American rightwingers, and one by an eccentric Norwegian. All of these draw some of their inspiration from the Egyptian Jewish exile Gisele Littman, who writes under the name of Bat Ye’or, and who believes that the European elites have conspired against their people to hand the continent over to Muslims.

As well as his very long manifesto, Breivik also laid out some of his thoughts on the Norwegian nationalist site Document.no. In his postings there, Breivik referred to something he called “the Vienna school of thought”, which consists of the people who had worked out the ideology that inspired him to commit mass murder. He named three people in particular: Littman; the Norwegian Peder Jensen who wrote under the pseudonym of Fjordman; and the American Robert Spencer, who maintains a site called Jihad Watch, and agitates against “the Islamisation of America”.

But the name also alludes to a blog called Gates of Vienna, run by an American named Edward “Ned” May, on which Fjordman posted regularly and which claims that Europe is now as much under threat from a Muslim invasion as it was in 1683, when a Turkish army besieged Vienna.