Younes Arar from the Center for Freedom and Justice in Beit Ommar talks to Robert Wright at Bloggingheads.tv. See also the Palestine Solidarity Project. 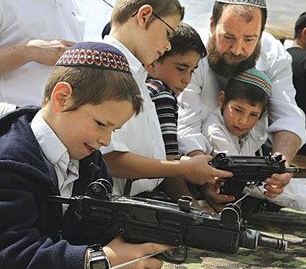 As Israel decided to further arm the settlers by providing them with stun grenades and tear gas bombs, the settlers, supported by extremist right wing factions in Israel, are preparing a plan to “respond to any popular Palestinian move that will likely take place as the Palestinian leadership asks the United Nations this month to recognize a Palestinian State with East Jerusalem as its capital.

Extremist right-wing factions in Israel are preparing a plan dubbed “children against children, women and women”, as part of settlers’ activities and attacks against the unnamed Palestinian population in the West Bank and in occupied East Jerusalem.

Jewish settlers, illegally living in the occupied territories, are a largely armed population and well trained for combat situations.

The settlers currently own more than half a million automatic rifles, and practically unlimited amounts of ammunition.

A number of fundamentalist settler organizations confirmed that the preparations started last month, and that plans to attack Palestinian areas are already in place to contain the anticipated Palestinian popular activities.