NETANYAHU: “Ladies and gentlemen, Israel has extended its hand in peace from the moment it was established 63 years ago.”

REALITY: The establishment of Israel in 1948 was accompanied by the expulsion of more than 700,000 Palestinians from their homes – over two-thirds of the population. It is estimated that more than 50 percent fled under direct military assault. Others fled in panic as news of massacres of hundreds of civilians in the villages of Deir Yassin and Tantura spread. Their exodus, or Nakba, was already nearly half-complete by May 1948, when Israel declared its independence and the Arab states entered the fray. Zionist forces depopulated more than 450 Palestinian towns and villages, most of which were demolished to prevent the return of the refugees. Although Jews owned only about seven percent of the land in Palestine in 1947 and constituted about 33 percent of the population, Israel was established the next year on 78 percent of Palestine. 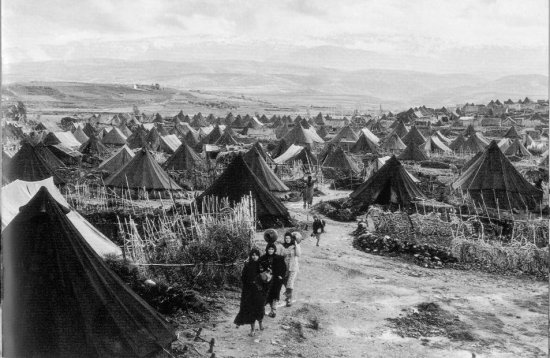 In 1967, Israel launched a surprise attack on Egypt, leading to the 1967 war, where it militarily occupied the remaining 22 percent of historic Palestine (the West Bank and Gaza Strip) as well as the Syrian Golan Heights and the Egyptian Sinai. Of all this territory, Israel has to this day returned only the Sinai.

REALITY: Israel is not above the law. International law is based on the notion that all human beings are worthy of the same rights and of being treated equally. These laws apply equally to all nations. The UN was instrumental in the creation of Israel through UN General Assembly resolution 181. Because of this, the UN, and the international community in general, bears a responsibility to help resolve the situation, guided by the standards of international law.

NETANYAHU: “Twenty-one out of the 27 General Assembly resolutions condemn Israel – the one true democracy in the Middle East.”

REALITY: For more than 43 years, Israel has militarily occupied the West Bank, Gaza Strip and East Jerusalem, a population now numbering 4.36 million people. Except for a few thousand Palestinian residents of East Jerusalem, this population has no voice in Israeli national policy despite being subjected to long-term Israeli occupation. Additionally, 1.2 million Palestinians are citizens of Israel and subject to more than 30 laws which discriminate against them solely based on their ethnicity, rendering them second or third-class citizens in their own homeland. From 1948 to 1966, those Palestinians who remained in what became Israel after the ethnic cleansing of the vast majority of the Palestinians from their homeland were governed by Israeli military rule (not unlike what exists in the Occupied Territories today). Thus for the entirety of its 63-year existence, there has been a period of only about one year, between the lifting of martial law in 1966 and the occupation which began in 1967, that Israel did not rule over large numbers of Palestinians to whom it granted no political or human rights. [Continue reading…]

1 thought on “The lies Netanyahu told at the UN”