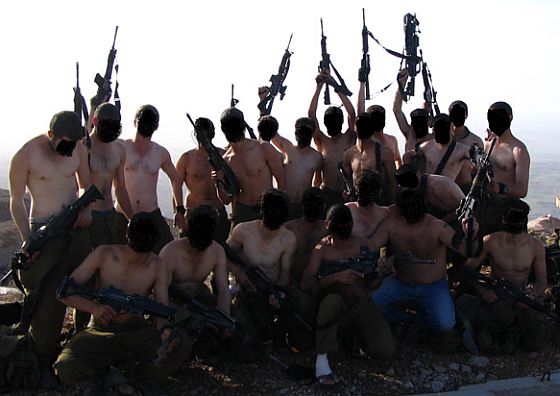 While Israeli authorities are making it increasingly difficult for non-violent international activists to visit the West Bank, suspected Jewish terrorists — members of the Jewish Defense League (JDL) — coming from France in recent days apparently had no difficulty reaching the illegal settlements which they claim they want to defend.

The FBI has described the JDL as a “right-wing terrorist group“. One of its most infamous charter members was Baruch Goldstein who attack unarmed Palestinian Muslim worshipers at a mosque in Hebron in 1994, killing 29 and wounding 125 others. On its website, the JDL says “We do not consider his assault to qualify under the label of terrorism,” in reference to Goldstein’s Hebron attack — they also describe him as “a brilliant surgeon, a mild-mannered Yeshiva-educated man.”

Al Jazeera reports on an operation organized by the French chapter of the JDL.

Two weeks ago, an announcement appeared on a French website, calling for “militants with military experience” to participate in a solidarity trip to Israel between September 19 and 25. “The aim of this expedition is to lend a hand to our brothers facing aggression from the Palestinian occupiers, and to enhance the security of Jewish towns in Judea and Samaria,” it explained. The dates of the trip coincide with the Palestinian statehood bid at the United Nations.

As of yesterday, in response to this call, there were 55 French citizens, both men and women, with military experience, stationed inside the illegal Israeli settlements up and down the West Bank. Organised into five separate groups of 11, their mandate is to “defend the settlements against any attack from Palestinians”, and to “aid” in areas where they feel there is a lack of Israeli army personnel or police forces.

The website belongs to the French chapter of the Jewish Defence League (JDL), a far-right Jewish group founded by Rabbi Meir Kahane in the United States in 1968. The Federal Bureau of Investigation has refered to the JDL as a “violent extremist organisation”.

“In France, it is a movement made up of French citizens who defend the Jewish community when faced with aggression, and also defends Israel in a more general manner,” said Amnon Cohen, a spokesperson for the group. “In terms of ideology, we are Zionists, pro-Israeli, and we share similar ideologies to that of the Ichud Leumi [“National Union”] party in Israel.” The National Union advocates the settlement of Jewish people in the entirety of the occupied West Bank, which it calls by its biblical name of Judea and Samaria.

“People say we are extreme because we believe in Judea and Samaria, and that this belongs to the Israelis, the Jews, but I don’t consider this to be extreme,” he told Al Jazeera. [Continue reading…]