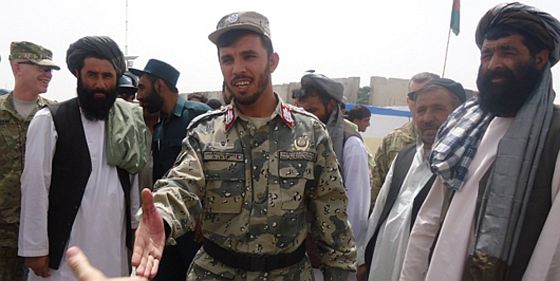 Shyly, at times smiling with weak adolescent bravado, the two young men recounted to me how they were beaten and tortured. It was July, and we were sitting at a table in the cavernous restaurant where they both work, in the stupefying summer heat. They slouched forward with their arms on their knees, frequently glancing down toward their open sandals, at toes where livid burns from the electrical wires were still visible.

I will call them Najib and Ahmad, though their names, like others in this article, have been changed to protect their safety. Both 23 years old, they looked like gangly young men who should be playing basketball on the street outside their house, or perhaps video games inside. But here in Kandahar City, the linchpin of the U.S. military’s campaign against the Taliban in southern Afghanistan, they had found themselves the victims of America’s Afghan allies.

One afternoon in June, two younger boys who worked at the restaurant, ages 12 and 14, had been stopped by the Afghan National Police while carrying home leftovers from an afternoon wedding. The boys, who were each paid about $60 a month, explained that they always took home leftover meals for their families. But this time they were arrested and accused of bringing food to insurgent fighters hiding outside the city.

Around 11 o’clock that night, police showed up at the restaurant and arrested Najib and Ahmad as well, accusing them of having sent the younger boys out to feed the Taliban. They were taken to police headquarters, where they were handed over to men wearing the mottled gray-green uniforms of the Border Police.

“They said, ‘We are going to beat you,’” Ahmad recalled.

The Border Police were a new sight in the city: rough-looking types with wraparound shades and bandoliers of grenades, who could be seen lounging at checkpoints throughout the city and guarding installations such as the governor’s palace. Though restricted by Afghan law to operate only in international airports or within 50 kilometers of the border, they’d entered the city on May 29 when their boss, Brigadier General Abdul Raziq, was appointed acting chief of police in Kandahar province, following the assassination of his predecessor. Raziq was well known as a warlord and suspected drug trafficker who had waged a brutal campaign against the Taliban. He was also a close ally of both President Hamid Karzai and the U.S. military.

Inside the station, the policemen tied a scarf to Najib’s handcuffs and hung him from the ceiling until he felt as if his arms were being pulled from their sockets. Then two men—one in uniform and holding a black metal baton, the other in plain clothes and wielding a length of cable—began beating him across his hips and thighs. A third man, also in plain clothes, questioned Najib: “What was the name of the commander you were bringing food to? How often do you bring food to the enemy?” Sobbing, Najib pleaded his innocence. In a nearby room, Ahmad could hear his friend’s screams, though he was spared for the time being.

When the beating was over, Najib and Ahmad were taken outside and thrown into the back of an armored Humvee, where they lay all night with their wrists still tightly cuffed, suffocating in the stiflingly hot, enclosed interior.

Early the next morning, they were taken to the governor’s palace, a long, low white compound fronted by a series of arches, jointly guarded by American soldiers and Border Police, where U.S. and Afghan officials meet on a daily basis. The police brought them around the back, to a filthy room that smelled of human waste, where they were shackled to the wall next to two other prisoners. Then, one at a time, they were taken to a second room, empty except for a gas-powered generator.

Najib went first. He was forced to lie on his back, and wires leading to the generator were attached to toes on both his feet. A group of Border Police crowded around him, jeering and spitting snuff on his face. “Tell us the truth,” they commanded. Then they switched on the power. “It felt,” Najib told me, “like my whole body was filled with moving knives.”

After he passed out from the pain, it was Ahmad’s turn to be tortured. When the two awoke from the ordeal, they were placed in separate rooms. In the evening, they were taken to police headquarters to see Abdul Raziq himself.

Raziq is just 33 years old, slender and boyish-looking, with a square jaw and a widow’s peak that tufts up beneath the embroidered pillbox cap he favors when he’s not in uniform. Uneducated but clever and charismatic, he is, despite his youth, one of the most powerful warlords in southern Afghanistan. He controls a militia of several thousand men, as well as the lucrative drug-smuggling routes that pass through his territory, which includes a key trading town called Spin Boldak, near the border with Pakistan.

That June evening, Najib and Ahmad were seated facing Raziq, who asked them to explain why they had been arrested. They told him about the younger boys who would take leftover food home to their families, and whether it was because they had not confessed, or because their stories had checked out, Raziq ordered them released.

Najib and Ahmad complained to me of suffering nerve damage in their wrists from being cuffed for two days, and both said they’d had problems with their kidneys since the electrocutions: Ahmad, who had the more-severe burns, urinated blood for three days afterward. I examined the wounds on Ahmad’s and Najib’s toes—distinct circular burn marks that were still raw and unhealed—and I spoke with a number of their co-workers, who corroborated their claims. I was also given photos of their injuries taken immediately after they were released, and was told their story independently by a source inside the Kandahar police department unhappy with the abuses taking place under Raziq. “That’s what happened to them, when they were innocent,” this official said. “Think of what they do to the guilty.”

What happened to Ahmad and Najib is not an isolated incident, but part of a larger pattern of abuse that has occurred wherever Raziq has been in power, first in his outpost of Spin Boldak and now in Kandahar City. Raziq has long been publicly suspected of drug trafficking and corruption; allegations that he and his men have been involved in extrajudicial killings, torture, and illegal imprisonment have been trickling out for years. Raziq categorically denies all such charges, telling The Atlantic, “When someone works well, then he finds a lot of enemies who try to ruin his name.”

Last fall, Raziq and his militia were given a starring role in the U.S.-led military offensive into Taliban-controlled areas west of Kandahar City, a campaign that boosted his prestige immensely. Mentored by an American Special Forces team, Raziq’s fighters won public praise from U.S. officers for their combat prowess. After the offensive, Raziq was promoted to brigadier general—a rank requiring a direct order from President Karzai—in a January ceremony at the governor’s mansion. As Ben Moeling, who was until July the State Department’s senior official in Kandahar province, explained to me at the time, the promotion was “an explicit recognition of his importance.”