Jamie Henn, Co-founder and Communications Director of 350.org, writes: Here’s a unique political strategy for you: in the lead up to a crucial election, as anti-corporate sentiment is sweeping the nation, consider giving a huge handout to a major corporation that happens to be your biggest political enemy and is already spending hundreds of millions to defeat you and your agenda.

If that seems too crazy to believe, welcome to the Obama 2012 campaign.

Right now, President Obama is faced with the most crucial environmental decisions he is going to face before the 2012 election: whether or not to approve the permit for the controversial Keystone XL pipeline, a 1,700 mile fuse to the largest carbon bomb on the continent, the Canadian tar sands.

The Keystone XL isn’t just an XL environmental disaster — the nation’s top climate scientists say that fully exploiting the tar sands could mean “essentially game over” for the climate — it also happens to be an XL sized handout to Big Oil and, you guessed it, the Brothers Koch. You want fries with that?

Earlier this year, when Representative Henry Waxman (D-Calif.) attempted to investigate whether or not the Koch Brothers stood to gain from the pipeline, the chairman of the House Committee on Energy and Commerce, Fred Upton (R-Mich.) called the idea an “outrageous accusation” and “blatant political sideshow.” Is it even necessary to mention that reports show Koch and its employees gave $279,500 to 22 of the energy committee’s 31 Republicans and $32,000 to five Democrats?

As you might expect, Upton was completely wrong. Reporters at InsideClimateNews and elsewhere proved that the Koch’s stand to make a fortune with the construction of the pipeline. The brothers already control close to 25 percent of the tar sands crude that is imported into the United State and own mining companies, oil terminals, and refineries all along the pipeline route. You can bet that the champagne will be flowing in Koch HQ when toxic tar sands crude starts moving down the pipe.

Which brings us back to Obama. It’s not too late for the president to intervene and stop the Koch Brothers from pocketing another profit at the expense of the American people. Because it crosses an international border, in order for the Keystone XL pipeline to be built the Obama administration must grant it a “presidential permit” that states that the construction project is in the national interest of the United States.

President Obama can deny the permit, right now, and shut down this flow of cash to the Kochs. In doing so, he’ll show that our national interest isn’t always determined by the 1%, in this case a few big oil companies and the Koch Brothers, but by the 99% of us who have to pay the price for their greed.

Denying the permit will also send a jolt of electricity through President Obama’s base, the millions of us who went out and volunteered and donated to the campaign because we believed in a candidate who said that it was time to “end the tyranny of oil.” In fact, this November 6, thousands of us former believers will be descending on Washington, DC to surround the White House with people carrying placards with the President’s own words in an attempt to resuscitate the 2008 Obama who seemed capable of standing up to folks like the Kochs. You can join here.

I can’t say that I’m privy to what the Obama 2012 campaign will advise the president to do when it comes to the pipeline. But if I was sitting in Chicago watching the Koch Brothers assembled their army of lobbyists across the nation, I’d be thinking that XL handout wasn’t such a good idea.

The Keystone XL pipeline network of corruption revealed through an investigation by DeSmogBlog, Oil Change International, The Other 98% and Friends of the Earth (click on the image below to view the complete network): 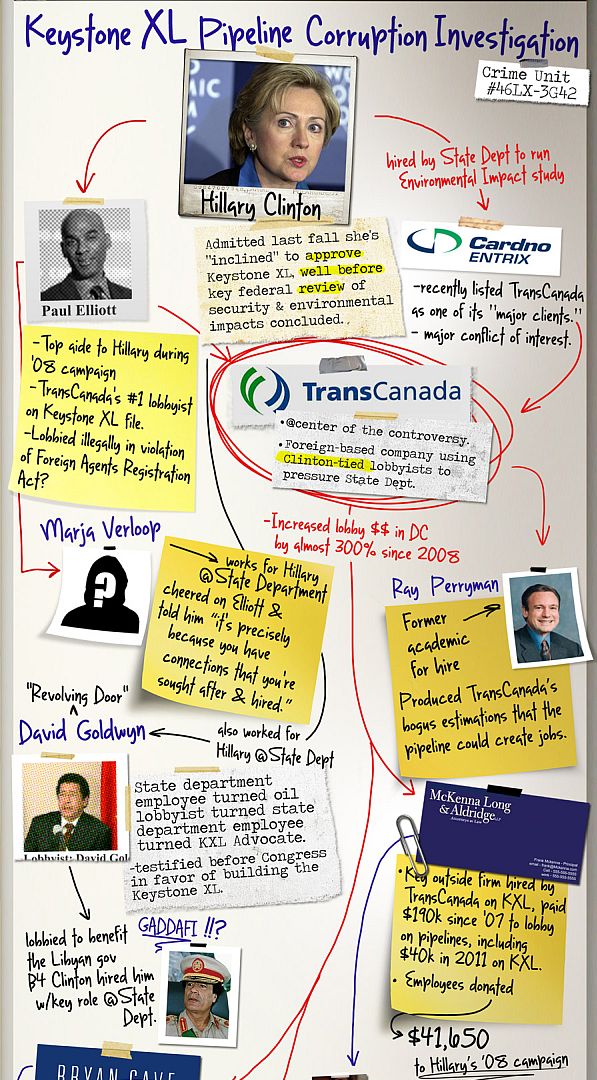