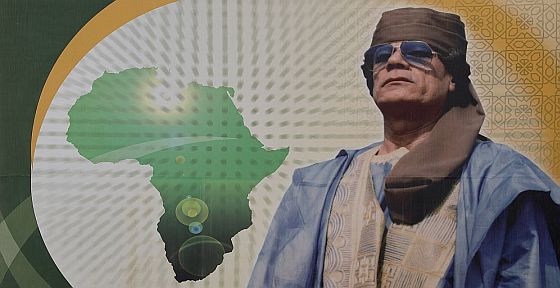 Juan Cole writes: The final weeks of Muammar Qaddafi’s violent and coercive life reminded me vividly of Jim Jones and the People’s Temple Cult. It was obvious from late last August that Qaddafi had lost. The people in his own capital of Tripoli rose up against him in all but a few small neighborhoods, courageously defying his murderous elite forces.

Qaddafi had on more than one been occasion offered exile abroad, but sneaked off to his home town of Sirte to make a suicidal last stand. His glassy-eyed minions determinedly fired every last tank and artillery shell they had stockpiled right into the city that sheltered them in order to stall the advancing government troops. This monumentally stupid last stand turned Sirte into Beirut circa the 1980s, as gleaming edifices deteriorated into Swiss cheese and then ultimately blackened rubble. Qaddafi had favored Sirte with magnificent conference centers and wood-paneled conference rooms even as he starved some Eastern cities of funds, and in his death throes he took all his gifts back away from the city of his birth, making it drink the tainted Kool-Aid of his maniacal defiance of reality.
[…]
The last stand at Sirte was very like Jim Jones’s last stand in the jungles of Guyana. Jones was an American religious leader who gradually went mad, demanding more and more sacrifice and obedience from the members of his People’s Temple congregation, which then gradually became a cult. I define a cult as a group wherein the leader makes very high demands for obedience and self-sacrifice, and the values of which diverge from those of mainstream society. When the outside world seemed clearly to be pursuing the People’s Temple into Guyana, with a Congressmen showing up in Jonestown to rescue a handful of adherents who wanted to go home, Jones reacted with fury, first sending a militia to kill the congressman and the defectors, and then instructing his followers to drink poisoned Kool-Aid. Many were injected with cyanide laced with liquids or shot. Those who would not agree voluntarily to be “translated” to the next world together with their messianic leader would be subjected to the ultimate coercion.

Qaddafi’s stand at Sirte underlined the cultish character of his politics, with the Revolutionary Committees and Khamis Brigades resembling the enforcers in Jim Jones’s encampment. The tragic episode highlights the irrationality, fanaticism, violence and tyranny of his acolytes.

It would have been better had Qaddafi been left alive to stand trial. The exact circumstances of his death are murky, but it appears that some of his loyalists may have attempted to rescue him from government troops and he died in the firefight or was dispatched lest he be sprung from captivity and serve as a rallying point for the remaining handful of cultists.

Those who expect Libya now to fragment, or to turn into a North African Baghdad, are likely to be disappointed. It is improbable that Qaddafi’s cult will long survive him, at least on any significant scale. Libya has no sectarian divides of the Sunni-Shiite sort. Almost everyone is a Sunni Muslim. It does have an ethnic divide, as between Arabs and Berbers. But the Berbers are bilingual in Arabic, and are in no doubt as to their Libyan identity. The Berbers vigorously joined in the revolution and more or less saved it, and are very likely to be richly rewarded by the new state.

The east-west divide only became dire because Qaddafi increasingly showed favoritism toward the west. A more or less democratic government that spreads around the oil largesse more equitably could easily overcome this divide, which is contingent and not structural.

Libyan identity is not in doubt, and most Libyans are literate and have been through state schools. Most Libyans live in cities where tribal loyalties have attenuated.

There will be conflicts, and factionalism is a given. The government is a mess, with only a small bureaucracy and limited pools of persons with management skills. But oil states in the Gulf facing similar problems back in the 1960s and 1970s just imported Egyptian bureaucrats and managers, and Egypt and Tunisia have a surplus of educated potential managers who face under-employment of their skills at home. Oil states most often generate enough employment not only for their own populations but for a large expatriate work force as well. Just as the pessimists were surprised to find that post-Qaddafi Tripoli was relatively calm and quickly overcame initial problems of food, water and services, so they are likely to discover that the country as a whole muddles through.

One of the most perverse features of a strand of “progressive” attitudes towards the war in Libya (evident among quite a few commenters on this site) is that if post-Gaddafi Libya turns out not to fall apart, this will be a cause of secret disappointment to those who invested so deeply in their own apocalyptic predictions. As I’ve said from the outset, this isn’t an argument worth expending much energy in, proving one side is right and the other wrong, since it’s an argument that doesn’t need to be won — events themselves will be the proof.

Having said that, I want to say more about the issue of cultism, because like Juan Cole, many other observers have noted the cultish features of Gaddafi’s rule.

Cults tend to be associated with religious belief rather than political rule and for that reason what could be seen around Gaddafi is more often described as cult-like rather than as being unambiguously a cult.

But what needs to be underlined is that cults are not defined by exotic belief systems.

The stereotypical image of a cult would be a group like Marshall Applewhite’s Heaven’s Gate whose members committed suicide in 1997 with the expectation that they would thereby board a spacecraft and escape from Earth.

The problem with associating cults with such belief systems is that the weirdness of these beliefs are really a distraction from the underlying social psychology that binds the cult together.

1. Cult members surrender their own autonomy by submitting themselves to the rule of a charismatic individual who has some kind of messiah complex. This is different from obedience to rule by say a monarch, because whereas there is a sharp divide between the king/queen and his/her subjects, cult members and cult leaders are bonded in the experience of merging in a supra-personal identity. Gaddafi didn’t simply rule Libya — he became Libya and his closest devotees could no longer differentiate between their love for him and their love for their country.

2. As a social entity, a cult depends on a rigid boundary between the inside and the outside. From the inside, outsiders are viewed as being so other and so lost that the outsiders’ word and the world they inhabit become worthless in the eyes of the cult. Communication only flows inside a closed and self-reinforcing system and as this closed society evolves, the contagion of unchallenged delusion infects the cult leader as much if not more than the cult followers. As rational as it might have been for Gaddafi to surrender or engineer a safe exit, he couldn’t do so without losing his identity — an edifice of such giant proportions that it became impossible to deconstruct.

The inherent structural weakness of every cult offers a lesson to society at large: a healthy society does not merely tolerate dissent; it recognizes dissent as an essential attribute of social vitality.

Dissent is the king’s fool. Without dissent there is no engine of adaptation.

8 thoughts on “The end of the Gaddafi cult”