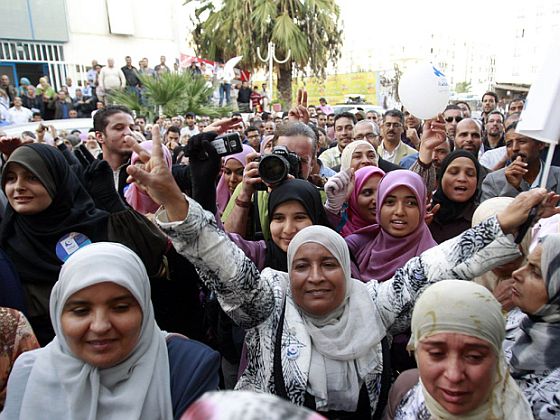 Tony Karon writes: Tunisia’s election and Libya’s celebration of the overthrow of Col. Muammar Gaddafi won’t have made for a happy weekend among those fevered heads in Washington who believe the West is locked in an existential struggle with political Islam: If anything, the Islamist tones of the Libyan celebrations, coupled with the Islamist victory in the Tunisian polls will have evoked the collapsing dominoes of Vietnam-era anti-communist metaphor.

“We are an Islamic country,” said Mustafa Abdel Jalili, leader of Libya’s Western-backed Transitional National Council in his speech proclaiming his country’s liberation on Saturday. “We take the Islamic religion as the core of our new government. The constitution will be based on our Islamic religion.” As Jalili spoke of lifting a Gaddafi era ban on polygamy and called for an Islamic banking system (which bans charging interest on loans), he was greeted by thunderous chants of “Allahu Akbar” (“God is great”). The character of Libya’s rebellion, at least among those doing the fighting rather than those doing the talking to Western governments, has been far more Islamist than its NATO backers may care to admit. Indeed, conspicuously absent from Jalili’s Benghazi liberation speech was Mahmoud Jibril, the Western-backed interim prime minister forced out at the behest of Islamist and regional militias, who accused him of trying to sideline them.

Jalili’s comments underscore the likelihood that a post-Gaddafi Libya will have a strongly Islamic character. Having emerged from a 42-year secular dictatorship, the smart money says that some version of political Islam will likely trounce any liberal rivals in the race to represent a national vision when a country riven by tribal and regional rivalries goes to the polls eight months from now.

In Tunisia, meanwhile, where some 90% of voters turned out to vote in the Arab rebellion’s first democratic poll, the only question remains whether the Islamist Ennahda party wins an outright majority, or must settle for a plurality of the vote that will requires it to lead a coalition government. Opposition parties had conceded on Monday, even before the count was completed, it was clear that Ennahda had won by far the largest share. The party’s leaders made clear, however, that they intended to seek a coalition.

There’s good reason to suspect that Tunisia’s electoral outcome will be repeated in an Egyptian poll: The main political contest there may turn out to be the one between the Muslim Brotherhood and its more radical Salafist challengers than between the Brotherhood and the secular liberals.

There’s no inherent contradiction between Islam and democracy — the range of political parties in the Muslim world claiming to be guided by Islamic values ranges from Turkey’s moderate, modernizing AK Party to the radical fundamentalist Salafis. Post-Saddam Iraq has been ruled by coalitions led by Shi’ite Islamist parties since its first election in 2005.

Democratically elected governments in the Arab world — most of which are likely to include a strong Islamist component, particularly when emerging from years of secular dictatorship — are highly unlikely to follow U.S. policy on Israel or Iran, but that doesn’t preclude them establishing pragmatic, cooperative relationships with the West. And if Washington’s yardstick for judging Arab political outcomes was the extent of support they yield for its own positions on Israel and Iraq, the U.S. would have to rely exclusively on dictators and monarchs.

Jonathan Steele writes: Having launched what became known as the Arab spring, Tunisia has now led the region by holding a clean election with an enthusiastic turnout and highly encouraging results. The three parties that have come out on top in the most democratic of north African states have no links with the capital city’s upper middle class or those sections of the business community that benefited from the ousted Ben Ali dictatorship. They both have a tradition of struggling for democratic values.

As in post-Mubarak Egypt, there was reason to fear that the old regime would re-emerge in Tunisia with new faces, but this now seems unlikely. The party that has emerged from the poll most strongly is An-Nahda (Renaissance), which suffered massive repression under Ben Ali and has won great respect for its sacrifices. This party of modern democratic Islam campaigned hard on the two issues that concern most Tunisians: corruption and unemployment, particularly youth unemployment.

While several smaller secular parties tried to manipulate Islamophobia – a relatively easy card to play given the official state-controlled media’s demonisation of the Islamists over several decades – their efforts have failed. Voters had their first chance to listen to An-Nahda’s candidates and they were not put off by what they heard. An-Nahda made special efforts to show that it wanted an inclusive government of national unity and would respect all points of view. It also reached out to voters in the more impoverished interior, making it clear it would not be just a party of the Mediterranean coast as Ben Ali’s regime had been.

The Associated Press reports: A moderate, once-banned Islamist party in Tunisia was on track Tuesday to win the largest number of seats in the first elections prompted by the Arab Spring uprisings, according to partial results.

The Tunisian electoral commission said the Ennahda party has won 15 out of 39 domestic seats so far in a 217-member assembly meant to write a new constitution. Together with the results announced Monday from Tunisians living abroad, Ennahda now has 24 out of 57 seats total, or just over 42 percent.

The final results from Sunday’s elections could boost other Islamist parties running in elections in North Africa and the Middle East.

1 thought on “Can the West stop worrying and learn to love the Islamists?”