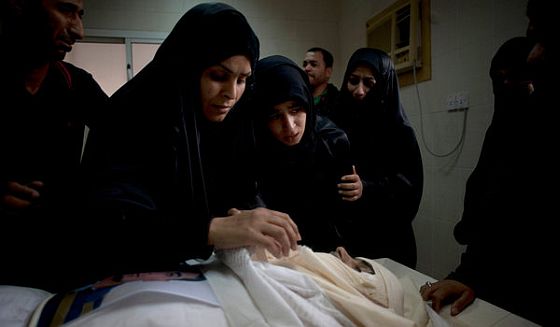 Family members in Sitra in March mourned a 30-year-old man killed by security forces. Government officials are suggesting the crisis in Bahrain has ended. No one in Sitra seems to agree.

Reporting from Sitra in Bahrain, Anthony Shadid writes: Sometimes a name suggests a condition. There was Beirut a generation ago, Baghdad more recently. In Bahrain, a Persian Gulf state so polarized that truth itself is a matter of interpretation, it is Sitra. Here, the faces of young men foretell a future for the country that looks like the rubble-strewn and violent streets of this town.

On a recent night, after clashes that erupt almost daily, one of them entered the house of a relative, squinting as though he had stumbled from a dungeon into the sun. Tear gas. His friend smirked as he showed the smooth scars left by rubber bullets fired at his leg and chest. Another shrugged as he removed his shirt to reveal a back scarred by pellets.

When the protests erupted in Bahrain in February, activists cast them as part of the Arab revolts, the wave of tumult that has upended an old order from Tunisia to Syria this year. That was before Saudi Arabia intervened militarily, before a crackdown ensued on the Shiite Muslim majority that was so sweeping they compared it to apartheid, before the most hard-line elements in the Sunni Muslim ruling family became ascendant.

Government officials today suggest that the crisis has ended, even as they acknowledge the damage it wrought in relations between Sunnis and Shiites in a country that had managed relative openness and even cosmopolitanism despite its entrenched inequality. “An open wound,” said Sheik Abdel-Aziz bin Mubarak al-Khalifa, a senior government counselor. But, he added, “We are in a much better place than we were three months ago.”

No one in Sitra seems to agree. This Shiite town of 80,000, a once-bucolic village of fishing and farming turned into a tableau of urban distress, is so restive that even opposition leaders shake their heads at its defiance. Nearly a third of the protesters killed — 10 so far — have come from Sitra, a half-hour drive from the capital, Manama, seething in a caldron of politicization, hardship and repression.

Though the clashes are nothing new — the 1990s witnessed similar bouts — their persistence and breadth signal the intractability of Bahrain’s conflict and mirror the unrest between the police and youths in other neglected Shiite towns.

“Sitra is a miniature version of Bahrain,” said Muhammad, another youth here, who like others interviewed did not want to be identified by his full name.

Added Sanad, his friend: “We are still here, we are demanding, and we exist.”

In scenes redolent of Hama in Syria, or parts of Tahrir Square at the height of Egypt’s uprising, youths build barricades at night to keep out the hated police, then remove some of them in the morning. There are telephone poles and cinder blocks and living room chairs and large trash bins, overturned and disgorging their soggy contents. The police have taken to foot patrols, given the difficulty of navigating the streets. Youths stand on corners, passing their own intelligence by cellphone, Twitter and Skype.

Even the fortresslike walls around the local police station are awash in graffiti, despite their ritual whitewashing. The slogans that remain bear the youths’ messages, revealed by the headlights of the occasional car driving on dark and empty streets. “Down with Hamad,” one reads, in a message to King Hamad bin Isa al-Khalifa. “We will only kneel before God,” declares another. Nearby, a slogan in red says, “The movement continues.”