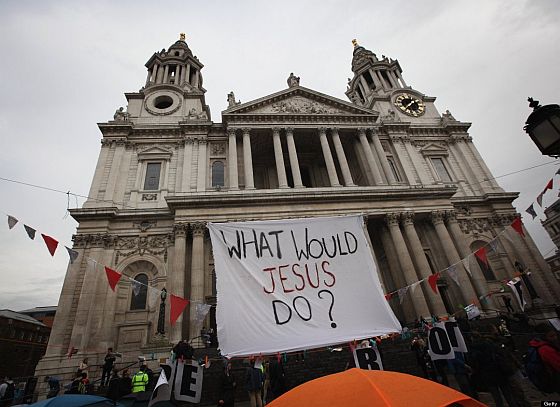 Occupy London protestors outside St Paul's Cathedral challenge the church to live up to its principles.

Time reports: The London arm of the worldwide Occupy Wall Street movement has proved its ability to shake up an institution, as a third senior cleric from St. Paul’s Cathedral has resigned in less than three weeks.

The Occupy London protest has been camped outside the historic church for a little more than two weeks, and St. Paul’s muddled response to the anti-corporate greed protesters has already resulted in public backlash, dissent within the church’s governing body and even resignations.

On Monday, Reverend Graeme Knowles, the dean of St. Paul’s, announced that he would be resigning from his position in the wake of criticism over the cathedral’s managing of the protest camp issue. With his announcement, Rev. Knowles joins two other senior clerics who’ve recently left St. Paul’s over the protest. Last week, canon chancellor Giles Fraser resigned, saying he thought that the cathedral’s opposition to the protest signaled they were “set on a course of action that could mean there will be violence in the name of the church.” Just days later, a part-time chaplain, Fraser Dyer, resigned because, as he noted on his blog, he was dismayed by St. Paul’s decision to evict the camp, and he did not “relish the prospect of having to defend the cathedral’s position in the face of the inevitable questions that visitors to St Paul’s will pose in the coming weeks and months.”

Andrew Rawnsley writes: A big mistake is to think that because the protesters tend to be youthful it follows that they should be treated like children. Richard Chartres, the Bishop of London, has made that error by suggesting to the campers that they ought to leave in return for a debate under the dome of St Paul’s – gosh, thanks my Lord Bishop. He further asks them to go on the grounds that: “I am involved in ongoing discussion with City leaders about improving shareholder influence on excessive remuneration.”

I am sure that the bishop is well-meaning, but that is not going to cut it. There has been “ongoing discussion” for years. The result, according to the latest report by Incomes Data Services: Britain’s top executives gave themselves a 49% increase in their salaries, benefits and bonuses in the past year. It does not even occur to the business and financial elite that it might be good old cynical public relations to moderate their greed while so many of their fellow citizens are suffering the consequences of corporate follies.

Who is truly the more adult: the protesters or an establishment that regards itself as older and wiser? The protesters have largely been very decorously behaved. They have thus far displayed no propensity to riot or to loot. Their tents are erected in rather neat rows. They hold laboriously consensus-seeking meetings at which they keep minutes and take votes. Their spokespeople are polite and articulate. If they do not have all the answers, they are at least posing some of the right questions. I don’t see why they should be criticised for the absence of a manifesto when the leaders of Europe spent months quarrelling and flailing over the euro crisis before scrabbling together an expensively botched compromise.

The protesters shun formal leaders and hierarchies – and I also don’t see why they should be criticised for this at a time when conventional leaders and hierarchies have been so conspicuously useless. Here are some recent scenes in establishment politics. Silvio Berlusconi displays his incomparable charms by describing Angela Merkel as “culona ichiavabile” (“an unfuckable lard arse”). Rick Perry, contender to become Republican candidate for the great office of president of the United States, questions where Barack Obama was born five months after the White House released his long-form birth certificate, and excuses himself by saying: “It’s fun to poke at him.” A punch-up breaks out on the floor of the Italian parliament between one right-wing member of the government and an even more right-wing member. Nicolas Sarkozy tells David Cameron to “shut up” because he is “sick” of him. David Cameron elevates the tone at prime minister’s questions by shouting: “Complete mug!” at Ed Miliband.

Protesters or leaders? I know who looks the more grown-up.

A Guardian video: Occupy London, a street level view: ‘How clear are we all on what consensus actually is?’

As St Paul’s reopens its doors, and the cathedral joins with the City of London Corporation to take legal action to evict the Occupy London protest, the activists come to terms with a manifesto being leaked to the press.