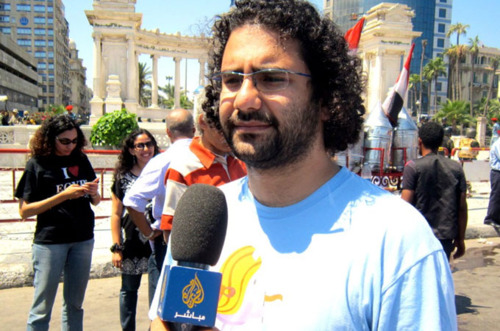 Brian Whitaker writes: Alaa Abd El Fattah is in jail. He was arrested on Sunday – accused of inciting violence against the Egyptian military – and on Monday was given 15 days’ detention for refusing to answer questions to a military court.

A campaign to secure his release has also got under way with extraordinary rapidity: protests in the streets, a Twitter hashtag (#FreeAlaa) and even graffiti appeared within the first 24 hours or so. That is not especially surprising as Alaa, besides being a pioneer of Egyptian blogging, belongs to one of the most famous families of leftist agitators.

By arresting him, the Supreme Council of the Armed Forces, which is currently running Egypt (and increasingly being referred to as “the junta”), has picked a fight with the core of the movement that toppled President Mubarak in January. Leftists, liberals and Islamists have all been rallying to Alaa’s support and it may not be long before the junta starts to regret its action.