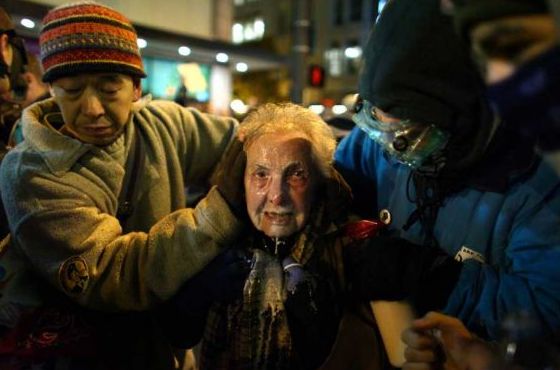 After 84-year-old Occupy Seattle participant Dorli Rainey was pepper sprayed by Seattle Police yesterday, she wrote: 'This is what democracy looks like. It certainly left an impression on the people who rode the No. 1 bus home with me. In the women's movement there were signs which said: Screw us and we multiply.'

When officials from 40 cities across America participated in conference calls on tackling the Occupy protests, they said their goal was to make the camps safe.

It sounds like the infamous attack on Ben Tre in the Vietnam War: “We had to destroy the village to save it.”

On a National Police Radio news bulletin yesterday afternoon, New York correspondent Robert Smith, reporting on the ongoing legal fight to reconstruct the camp at Ziccotti Park, said of the dispute: one person’s trash is another person’s free speech — overlooking the fact that what he referred to as “trash” were the personal belongings of others.

Likewise, when NPR reports on the destruction of camps, they happily parrot the police by using the term “dismantle” — as though officers take pains to find matching bags into which they can slip neatly folded sleeping bags, all the while making sure every item gets carefully tagged so later it can safely be returned to its owner.

In truth the camps have been dismantled in much the same way that Israeli soldiers “dismantle” Bedouin villages that the authorities deem illegal.

In many ways, the real clash is between those who cling to the anti-democratic powers that the state grabbed after 9/11, and those who dare to declare that we should no longer be governed by fear.

Tellingly, the authorities in New York planned the assault on Occupy Wall Street like a counterterrorism operation.

“From the beginning, I have said that the city had two principal goals: guaranteeing public health and safety, and guaranteeing the protesters’ first amendment rights. But when those two goals clash, the health and safety of the public and our first responders must be the priority,” Mayor Bloomberg said, asserting that “safety” is more important than liberty.

[T]he police operation to clear Zuccotti Park of protesters unfolded after two weeks of planning and training. Officials had prepared by watching how occupations in other cities played out. A major disaster drill was held on Randalls Island, with an eye toward Zuccotti. Officials increased so-called disorder training — counterterrorism measures that involve moving large numbers of police officers quickly — to focus on Lower Manhattan.

The last training session was on Monday night, on the Manhattan side of the East River. The orders to move into the park came down at the “last minute,” said someone familiar with the orders, which referred to the assignment only as “an exercise.”

Once the operation began, the area around the park was declared a “frozen zone”.

What gets frozen in a frozen zone? The U.S. Constitution — no more freedom of assembly, free speech, or free press.

The Associated Press reports on the spontaneously coordinated assault on Occupy camps across America:

As concerns over safety and sanitation grew at the encampments over the last month, officials from nearly 40 cities turned to each other on conference calls, sharing what worked and what hasn’t as they grappled with the leaderless movement.

In one case, the calls became group therapy sessions.

While riot police sweeping through tent cities in Portland, Ore., Oakland, Calif. and New York City over the last several days may suggest a coordinated effort, authorities and a group that organized the calls say they were a coincidence.

“It was completely spontaneous,” said Chuck Wexler, director of the Police Executive Research Forum, a national police group that organized calls on Oct. 11 and Nov. 4. Among the issues discussed: safety, traffic and the fierceness of demonstrations in each city.

“This was an attempt to get insight on what other departments were doing,” he said.

From Atlanta to Washington, D.C., officials talked about how authorities could make camps safe for protesters and the community.

Has the United States really become a country where we are supposed to be afraid of freedom and nervous about democracy?

8 thoughts on “When government no longer prizes liberty, no one is safe”