MSNBC reports: A well-known Washington lobbying firm with links to the financial industry has proposed an $850,000 plan to take on Occupy Wall Street and politicians who might express sympathy for the protests, according to a memo obtained by the MSNBC program “Up w/ Chris Hayes.”

The proposal was written on the letterhead of the lobbying firm Clark Lytle Geduldig & Cranford and addressed to one of CLGC’s clients, the American Bankers Association.

CLGC’s memo [PDF] proposes that the ABA pay CLGC $850,000 to conduct “opposition research” on Occupy Wall Street in order to construct “negative narratives” about the protests and allied politicians. The memo also asserts that Democratic victories in 2012 would be detrimental for Wall Street and targets specific races in which it says Wall Street would benefit by electing Republicans instead.

According to the memo, if Democrats embrace OWS, “This would mean more than just short-term political discomfort for Wall Street. … It has the potential to have very long-lasting political, policy and financial impacts on the companies in the center of the bullseye.”

Here’s an extract from the memo: 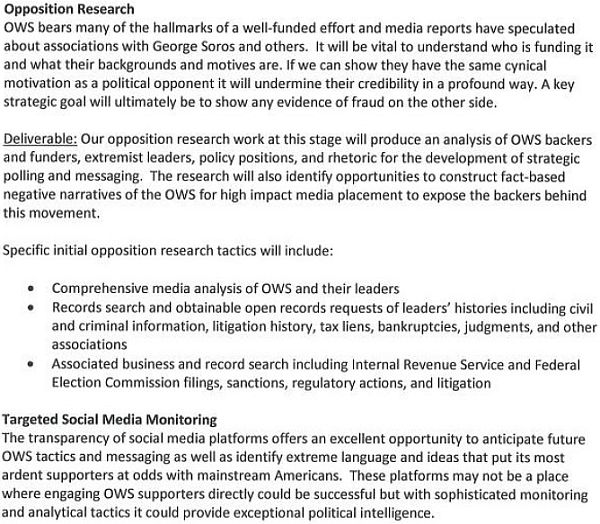