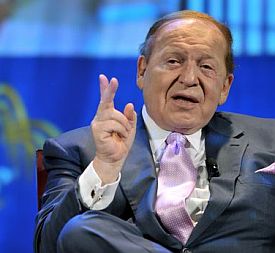 Think Progress reports: The funding behind Newt Gingrich’s American Solutions for Winning the Future, an independent political committee, offers an intriguing clue into the financial deep pockets backing Gingrich’s candidacy. This week, McClatchy revealed that American Solutions footed the $8 million bill for private jet charters while Gingrich weighed whether to enter the 2008 and 2012 presidential races. Casino billionaire Sheldon Adelson was the biggest funder of American Solutions, contributing $7.65 million and rumored to have committed $20 million to a pro-Gingrich super PAC, a report denied by an Adelson spokesperson. Whether the report is true or not, the facts increasingly show that the billionaire casino magnate is a central figure in Newt Gingrich’s political career.

Sands Corporation CEO Sheldon Adelson is based in Las Vegas but has business and political interests in Macau, China and Israel. In Israel, Adelson’s importance stems from his close friendship with Israeli Prime Minister Benjamin Netanyahu and his ownership of Israel HaYom, a free daily newspaper which supports Netanyahu’s Likud party. Back in the U.S., Adelson sits on the board of the Republican Jewish Coalition and is outspoken about his views on the Israeli-Palestinian conflict.

During the George W. Bush presidency, Adelson opposed efforts to jump start peace talks between the Israelis and Palestinians and even took sides against the influential American Israel Public Affairs Committee (AIPAC) when the organization supported peace talks. “I don’t continue to support organizations that help friends committing suicide just because they say they want to jump,” Adelson told the Jewish Telegraph Agency.