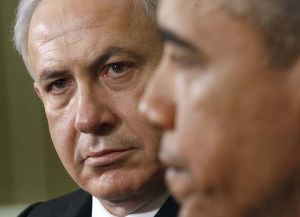 The US presidential election campaign that kicked off January 3 with the Iowa caucuses was the subject of a curious article attacking President Barack Obama in the mass circulation Israeli daily newspaper, Israel Hayom.

“US President Barack Obama is ‘naïve’ and needs to face up to the threat presented by the rise of the Muslim Brotherhood across the Middle East, Israel’s National Security Council concluded during a strategic discussion several days ago,” Israel Hayom reported.

The Israeli National Security Council consists of Benjamin “Bibi” Netanyahu’s closest advisers. And Israel Hayom is not just another right-leaning Israeli tabloid. Referred to by Israelis as the “Bibiton,” or Bibi’s mouthpiece, the paper is an instrument that gives him extraordinary political leverage. The obviously planted article in Israel Hayom rang like a bell sounding the start of Netanyahu’s own campaign in helping the Republican Party oust Obama from the White House.

Israel Hayom’s genesis demonstrates the depth of Netanyahu’s connections in Republican circles. It was created by one of Netanyahu’s top financial supporters, a Las Vegas-based casino tycoon named Sheldon Adelson, who is also a major donor to the conservative wing of the Republican Party. Adelson’s closest relationship is with former Speaker of the House Newt Gingrich, a longtime ally of Netanyahu who has been running a rancorous campaign for the Republican presidential nomination.

Netanyahu’s less than subtle intervention has become an open issue in Israeli politics. Opposition leader Tzipi Livni of the Kadima Party has criticized Netanyahu for damaging the US-Israeli relationship. “Netanyahu spoke about consensus,” Livni said in May, “and if there is a consensus in Israel, it’s that the relationship with the US is essential to Israel, and a prime minister that harms the relationship with the US over something unsubstantial is harming Israel’s security and deterrence.”

But Livni’s warning has been ignored. Rather than hesitating, the prime minister and his inner circle are moving full steam ahead in their political shadow campaign whose ultimate goal is to remove Obama. Bibi’s war against Obama is unprecedented. While Israeli prime ministers have tried to help incumbent presidents, none have ever waged a full-scale campaign to overthrow them. [Continue reading…]