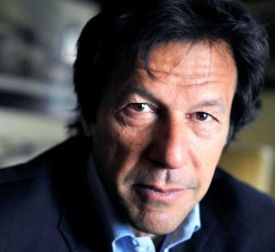 Arif Rafiq writes: In 1992, with his cricket career at its twilight, an aging Imran Khan boldly pledged that the Pakistani national team would win the World Cup for the first time. In March of that year, before a packed stadium in Melbourne, Pakistan defeated former colonial master England, taking the cup and shocking the world of cricket. Khan returned home with a trophy in his hands, enshrined forever as a national hero.

These days, Khan leads another group of underdogs: a political party known as the Pakistan Tehreek-e Insaf (PTI). Last September, Khan made a familiarly bold prediction: PTI, which has only won a single National Assembly seat in its 15-year history, will sweep the next general elections. PTI, Khan says without a semblance of doubt, will rid Pakistan of corruption, endemic poverty, and violence — and eventually bring the country to what he sees as its rightful place on the world stage.

Since his retirement from cricket, Khan has been devoted to social work and politics. Inspired by his mother’s death, he founded the world-class Shaukat Khanum Memorial Cancer Hospital and Research Center, trusted and respected by Pakistanis of all stripes. Khan’s political career, however, has been another story. PTI, despite the initial hype and fanfare, never really took off. Its founding members left the scene early on, and Khan was regularly outsmarted by wilier politicos.

A solitary Khan would regularly lambast the political class on Pakistan’s many talk shows. Critics dismissed him as the darling of the country’s television anchors and the electorally irrelevant “burger-baby” and “mummy-daddy” types (i.e. coddled, Westernized, rootless, upper-middle class youth). Political satire shows lampooned him as a raving, repetitive political loser.

In 2005, Sheikh Rashid Ahmad, then a backer of military ruler Pervez Musharraf, mocked Khan and patronizingly offered to help him win a seat “anywhere he wants.” Fast forward six years ahead, and Sheikh Rashid, seated next to Khan on live television, was ingratiatingly referring to the ex-cricketer as a “brother” and meekly asking him for help in winning a few seats in the next elections.

Once an electoral non-entity, Khan’s PTI could potentially win dozens of National Assembly seats in the next polls — hence the Pauline conversion of opportunists like Sheikh Rashid. Already, PTI has upended the détente between the two major political powers — the Pakistan Peoples Party (PPP) and the Pakistan Muslim League-Nawaz (PML-N) — and put both on the defensive. PTI might become the country’s third-largest party, giving it the power to determine who heads Pakistan’s next coalition government. Khan, no longer a political joke, is a potential kingmaker positioned to prove the doubters wrong once again.