Newsweek’s current cover looks like a promotion for a Glenn Beck special: The War on Christians. No doubt the magazine’s editors thought they could get away with such a provocative headline because the byline lends it a token of authority. 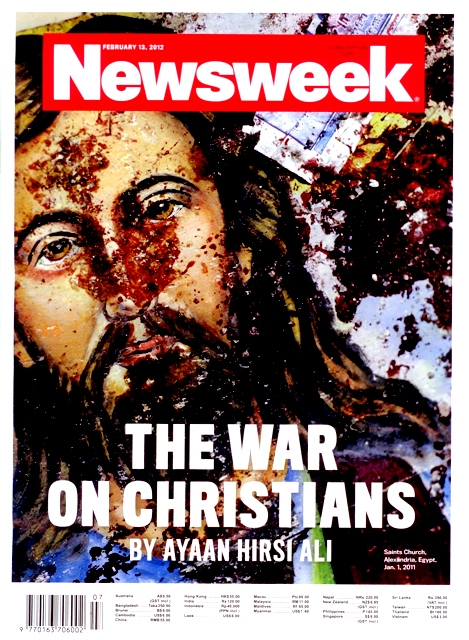 Were this declaration to come from Beck or anyone of his ilk, it would be dismissed by Newsweek’s editors and many of its readers as conservative hysteria, but spouted by a celebrity former Muslim it suddenly demands serious attention. There also comes a side benefit — “The War on Christians” is a conservative mantra, from their lips referring to a war supposedly being fought by President Obama against Christians, so perhaps Newsweek felt like it might be doing some useful and surreptitious rebranding, decoupling Obama from this slur.

At GetReligion.org, Terry Mattingly observes that Newsweek these days is short on news.

As a rule, under super-editor Tina Brown, it has been an at times lively but ultimately confusing mixture of commentary, commentary and more commentary…

And the NEWS in Newsweek? That’s the strange part. The goal of the magazine seems to be to handle serious news topics (mixed with entertainment topics, of course) but in a way that it is impossible to take seriously as journalism. Newsweek is becoming the land of the unattributed fact.

To see this process at work, please read the Ayaan Hirsi Ali cover story discussing “The War on Christians in the Muslim World.” In this case, the cover’s zinger quality is provided by the author’s identity as a Muslim apostate, atheist, militant secularist and defender of old-fashioned human rights — such as religious liberty and free speech. Ali is so liberal that she is now considered, by many, to be a conservative.

In an interview with MSNBC, Newsweek executive editor Justine Rosenthal draws on one of the unattributed “facts” provided by Hirsi Ali: “In Egypt, for example, 200,000 Coptic Christians have fled their homes and very little is being done to stop that sort of violence.”

On what does Hirsi Ali base her claim that 200,000 Copts have fled?

The only reference I can find to this number of Copts fleeing is a Washington Times report in October last year which said:

A report released last month by an Egyptian nongovernmental organization estimated that 93,000 Christians already had fled the country since March, a figure some are predicting could top 200,000 by the end of year.

It would appear that this prediction made by persons unknown got turned into a “fact” by Hirsi Ali and now Newsweek is happy to cite this as a piece of evidence upon which it wants to buttress its cover story.

As for the cover itself, no doubt the magazine’s editorial team found the blood-stained image of Christ an irresistible piece of iconography, but I wonder whether they delved at all into the story behind the photograph.

On New Year’s Day, 2011, the Coptic al-Qiddissin (Saints) Church in Alexandria, where the photo was taken, was the target of a bombing that killed 23 people, Christians and Muslims, while 97 more were injured. The attack was internationally condemned and widely perceived as evidence of sectarian tension. The Interior Ministry blamed “foreign elements,” and the Alexandria governor accused al Qaida of being responsible, yet in a foretaste of the nationwide protests that were to erupt three weeks later, Christians unleashed their rage not at their Muslim neighbors but at the authorities.

Former Interior Minister Habib el-Adly in the U.S.-backed Mubarak government was later accused of having instigated the bombing.

In the following days, fearing that Churches might face similar attacks, Muslims formed human shields in order to defend Copts going to worship.

There’s no question that in Egypt and elsewhere Christians have been the targets of sectarian violence, but what Newsweek is doing is shamelessly promoting the view that Christianity is under attack by Islam. We’re back in the territory of a clash of civilizations — but no mention of another phenomenon: the attacks upon Christians that occur daily in Israel.

How does Hirsi Ali want to see “Christophobia” addressed?

As for what the West can do to help religious minorities in Muslim-majority societies, my answer is that it needs to begin using the billions of dollars in aid it gives to the offending countries as leverage.

It might be hard for the U.S. to apply such leverage since there is only one country to which the U.S. actually gives billions of dollars of aid each year: Israel.

3 thoughts on “Is this how Newsweek hopes to get raised from the dead?”