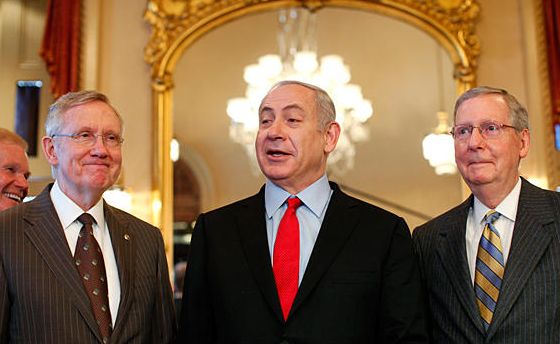 The Jerusalem Post reports: Citing historical precedents in which the US and Israel did not see eye-to-eye and Israel acted according to its own perception of its interests, Prime Minister Binyamin Netanyahu told congressional leaders Tuesday that Israel viewed things differently than the US did at times, because it was not a global power and was more vulnerable.

Israeli sources said Netanyahu, meeting congressional leaders before flying back to Israel Tuesday evening, noted that David Ben-Gurion declared independence against the advice of the US; Levi Eshkol launched a preemptive attack in 1967, against Washington’s counsel; and Menachem Begin decided to bomb the Iraqi nuclear reactor in 1981 despite US opposition.

America has global interests, while Israel is “on the ground and more vulnerable,” Netanyahu said in reference to Iran, saying that this made for a very different perspective.

Netanyahu followed up his meeting at the White House Monday with meetings on Capitol Hill on Tuesday, as leaders of both parties pledged commitment to a robust policy to keep Iran from getting nuclear arms.