One of the paradoxes of the way the U.S. media covers the rest of the world is that on the one hand, the only matters that merit attention are those which are deadly serious — wars, famine, catastrophes, and crises of one kind or another — and yet at the same time these stories are told with as much depth as a comic book cartoon strip.

Iran is ruled by “mad mullahs” plotting to get their hands on nuclear weapons. A “noose” of sanctions is being tightened around the country to force its leaders to back away from their diabolical efforts.

In this narrative the country of 70 million ordinary people and their everyday lives is lost.

In a new feature, “Iran Standard Time,” Tehran Bureau is offering some of the details of life and lives in their minute richness — the kind of details that get lost by a media which fixates on danger and ignores people. 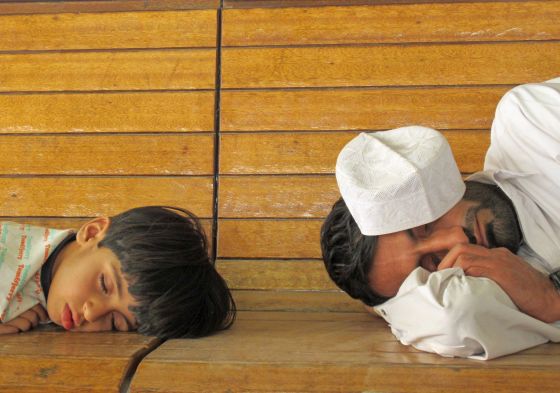 Tehran Bureau: “This weather is terrible for chicken farmers,” jokes Hossein, a dark, wiry man in his late 20s, as he looks at the sunrise over the Persian Gulf, largely blotted out by a dense sandstorm. “The sand gets caught in chicks’ throats and they suffocate.”

Hossein, who supplies Tehran’s jujeh kebab vendors by personally slaughtering 2,000 chicks every 45 days, is one of around 200 passengers aboard the Hormuz, a rusted ship docked in Iran’s biggest port, Bandar Abbas, waiting for the weather to clear to sail to the Emirati city of Sharjah. He is from Bastak, a tiny ancient Iranian town in the southern stretch of the Zagros mountain range. Its 6,000 inhabitants speak a Middle Persian dialect, and most of them move between these hot highlands to the even hotter irrigated deserts of the UAE for business or to see their migrant relatives.

Flanking Hussein on the sunny deck is his friend and hamshahri (town-fellow) Ali, a skinny onion farmer who is adroitly peeling a orange with his large cracked hands, and fortuitously, Farzin, a professor of water resources from Shahrekord University. The professor says that our current predicament is the result of winds sweeping across lands that have been affected by the region’s five-year drought. “The drought is strong in the southwest near Iraq and Saudi and in the northeast, near Afghanistan,” he explains with the aid of a map he carries around. “In Shahrekord, we are in the Zagros Mountains, which used to have a very snowy climate. Now we just get rain.”

We are on the last Iranian vessel to cross the now world-famous Strait of Hormuz before Nowruz, the Iranian New Year. It’s filled with people who were too late or too broke to find a flight during the notoriously busy final days of the Persian year, when Iran experiences an exodus for the two-week break. What the demob-happy passengers don’t know yet is that they will be spending Nowruz at sea, as a ten-hour delay stretches into a two-day waiting game.

I had spent the day before in Bandar Abbas, against the emphatic advice of my guidebook. Bandar, a sweltering town even in spring, is home to some of Iran’s best beaches — even if classical aesthetes might demur over everything aside from its clear water. Thronged with visitors from all over the country hitting the Persian Gulf for the holidays, the scene is a very Iranian affair: girls flying kites, boys on camels or quad bikes, men smoking, families picnicking, litter everywhere, women swimming in full hejab, and morality beach police enforcing strict swimwear rules (don’t wear it). The women of Bandar mostly forgo the chador and northern Iran’s stark black sartorial style, opting instead for colorful sari-like gowns, which drape over their heads and shoulders. [Continue reading…]