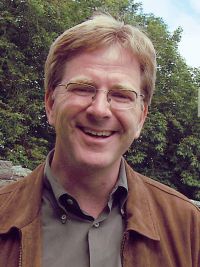 Rick Steves is the Mr Rogers of travel shows. I picture him as someone who probably smiles even when he’s asleep. So if this guy gets upset about something, it has to be serious.

Here’s Steves’ commentary from one of his shows several years ago while visiting Israel:

Tourists become pilgrims at Israel’s Holocaust Memorial. All visiting heads of state are brought here to Yad Vashem. The Memorial Museum chronicles the slaughter of 6 million Jews by Nazi Germany. Artist David Olere left an excruciating record in these drawings of his 26 months in Nazi concentration camps. He was a prisoner at Drancy, Auschwitz, Mauthausen, Melk and finally liberated from Ebensee in 1945.

The boxcar monument is a chilling reminder of Hitler’s master plan to eliminate Jews, gypsies, homosexuals, the mentally ill and political dissenters. Train loads were carted away.

And here along the “Avenue of Righteous Gentiles”, trees are planted to honor non-Jews who risked their lives to help the persecuted. Yad Vashem imprints on visitors a searing impression of the horror. One must recognize the cause and the enormity of the Holocaust to understand the history of modern Israel.

The sky-scrapers of Tel Aviv are exclamation points which seem to declare that freedom is worth fighting for. The fruits of all the struggle may best be enjoyed here in the cosmopolitan heart of Israel. My best tip for enjoying Tel Aviv: see it as a fun-loving resort, just the opposite of Jerusalem.

Tel Aviv’s waterfront promenade is the place to rock to the rhythm of contemporary Israel — foamy cafes, sugar-sand beaches and the Mediterranean. With a “use it or lose it” approach to the good life, young Israelis embrace the present.

But then something happened… Yesterday, at Huffington Post, Steves wrote:

Do you know the frustration you feel when you believed in something strongly and then you realize that the information that made you believe was from a source with an agenda to deceive?

I just watched a powerful and courageous documentary called Peace, Propaganda, and the Promised Land. It certainly has its own agenda and doesn’t present balanced coverage. Still, it showed me how my understanding of the struggles in the Middle East has been skewed by most of our mainstream media. I saw how coverage of the Israeli/Palestinian problem is brilliantly controlled and shaped. I pride myself in understanding how the media works… and I find I’ve been bamboozled.

Invest 75 minutes in watching this, because most of the time we only hear one viewpoint when it comes to the interminable struggle in the Holy Land. While this documentary would never be shown on commercial TV in the USA, it can be viewed online (Peace, Propaganda, and the Promised Land). In my view, many Palestinians live under inhumane conditions, and U.S. taxpayers help to make it happen. Please, watch this and then share your impressions.

Criticism of Israel’s policies is not automatically anti-Semitic (see J-Street for an example of a pro-Israel, pro-peace group). In fact, the irony is that for Israel’s hard-liners, their clever PR strategy could be their own worst enemy. While Israel certainly deserves security on its land, the Israeli occupation of Palestinian territory (in Gaza and the West Bank) degrades Israel and drives Palestinians to desperation. The question of whether Israel is conducting a brutal military occupation or a reasonable defense against terrorism gets no real airtime. If we care about the long-term security of Israel, we have a responsibility to understand what our government is funding and supporting.

I believe that watching this documentary is a painful first step to finding a just and lasting peace in the Middle East. If you are a friend of Israel, you must watch Peace, Propaganda, and the Promised Land.

Peace, Propaganda, and the Promised Land was made in 2003 during the Second Intifada. Very little of its content will come as news to regular readers of this site. What is striking about Rick Steves’ reaction to the documentary is that it reveals the degree to which Americans who are cosmopolitan and reasonably well-informed about the world still by and large have a deeply distorted view of Israel. When the veil falls away they are shocked by what they discover.

Ignorance provides the bedrock of the United States’ close relations with Israel and as that ignorance erodes, more and more Americans will become angry and ashamed about the role they unwittingly played in the support of a state whose brutality has for so long and so effectively been hidden from American eyes.

7 thoughts on “Rick Steves discovers Palestine and the Israeli occupation”