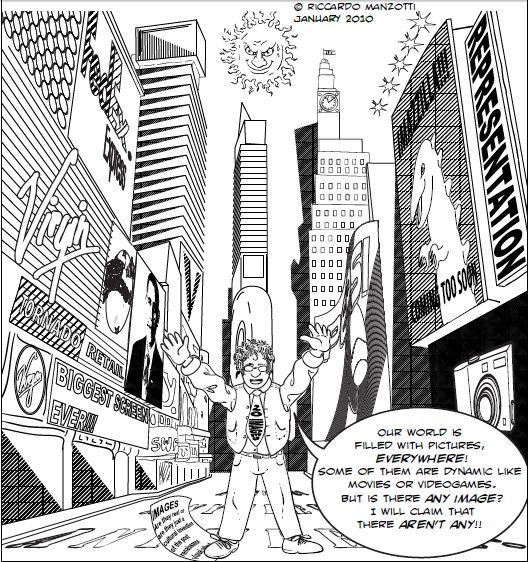 Tim Parks writes: “There are no images.” This was the first time I noticed Riccardo Manzotti. It was a conference on art and neuroscience. Someone had spoken about the images we keep in our minds. Manzotti seemed agitated. The girl sitting next to me explained that he built robots, was a genius. “There are no images and no representations in our minds,” he insisted. “Our visual experience of the world is a continuum between see-er and seen united in a shared process of seeing.”

I was curious, if only because, as a novelist I’d always supposed I was dealing in images, imagery. This stuff might have implications. So we had a beer together.

Manzotti has a degree in engineering and another in philosophy. He teaches in the psychology department at IULM University, Milan. The move from engineering to philosophy was prompted by conceptual problems he’d run into when first seeking to build robots. What does it mean that a subject sees an object? “People say the robot stores images of the world through its video camera. It doesn’t, it stores digital data. It has no images.”

Manzotti is what they call a radical externalist: for him consciousness is not safely confined within a brain whose neurons select and store information received from a separate world, appropriating, segmenting, and manipulating various forms of input. Instead, he offers a model he calls Spread Mind: consciousness is a process shared between various otherwise distinct processes which, for convenience’s sake we have separated out and stabilized in the words subject and object. Language, or at least our modern language, thus encourages a false account of experience.

His favorite example is the rainbow. For the rainbow experience to happen we need sunshine, raindrops, and a spectator. It is not that the sun and the raindrops cease to exist if there is no one there to see them. Manzotti is not a Bishop Berkeley. But unless someone is present at a particular point no colored arch can appear. The rainbow is hence a process requiring various elements, one of which happens to be an instrument of sense perception. It doesn’t exist whole and separate in the world nor does it exist as an acquired image in the head separated from what is perceived (the view held by the “internalists” who account for the majority of neuroscientists); rather, consciousness is spread between sunlight, raindrops, and visual cortex, creating a unique, transitory new whole, the rainbow experience. Or again: the viewer doesn’t see the world; he is part of a world process. [Continue reading…]

2 thoughts on “There are no images”