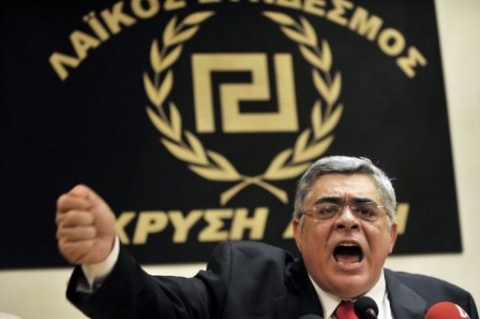 Nikolaos Michaloliakos: 'Those who betray this country - it’s time for them to be afraid. We are coming.'

The Associated Press reports: The leader of an extreme-right, anti-immigrant party on course for shock success in Greece’s general elections Sunday lashed out at those he described as “traitors” responsible for the country’s financial crisis and said his party was ushering in a “revolution.”

The far-right Golden Dawn party is set to win 7 percent of the parliamentary vote, according to early projections, as Greeks punished the traditionally dominant parties who backed harsh austerity measures tied to debt-relief agreements.

Parties must exceed a 3-percent threshold of the vote to be represented in Greece’s parliament. In the last general election in 2009, Golden Dawn received merely 0.29 percent. It has seen its support jump as a wave of anti-immigrant sentiment has spread in financially devastated Greece.

Golden Dawn leader Nikolaos Michaloliakos told The Associated Press in an interview that his party had delivered a blow against the country’s corrupt leadership.

“They slandered us, slung mud at us, and shut us out of all the news media — the TV channels of the corrupt elite — and we beat them,” the 55-year-old leader said as the votes came in. “The day of national revolution by the Greeks has begun against those who are selling us out and looting the sweat of the Greek people.”

Golden Dawn campaigned hard against illegal immigration, and its supporters have been blamed for a recent spike in inner-city street attacks against mostly Asian immigrants.

The party’s supporters, routinely seen intimidating dark-skinned immigrants in run-down parts of the capital, wear black shirts, and its emblems resemble Nazi insignia. But Michaloliakos has rejected the neo-Nazi label widely used for his party, stressing that it is staunchly nationalist. 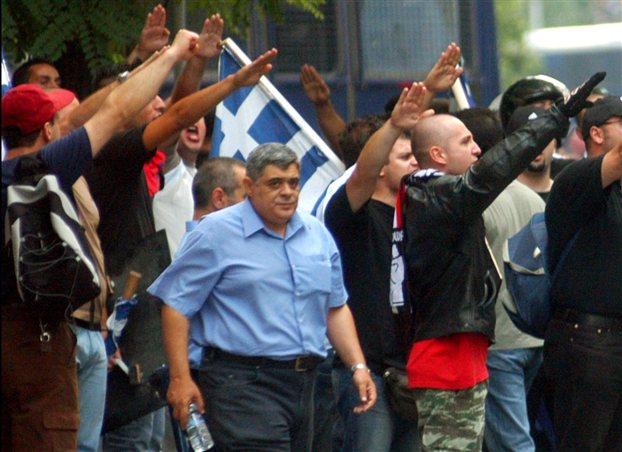