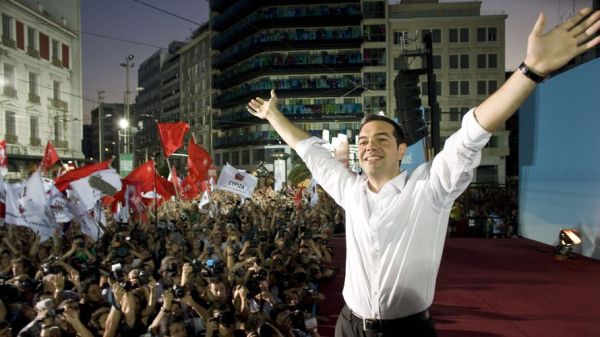 Costas Douzinas and Joanna Bourke write: The Financial Times Deutschland last week published an article on its front page headlined “Resist the demagogue“. It was written in Greek. The article advised the Greeks to reject the radical left Syriza party and vote for the rightwing New Democracy today. It is the culmination of an astounding campaign of fear and blackmail against the democratic right of Greeks to elect a government of their choice.

Angela Merkel, the European commission president José Manuel Barroso, and even George Osborne, have ordered the Greeks to vote the right way. This direct intervention into the democratic process of a sovereign state follows a plethora of threats and rumours, secrets and lies, telling people that if they vote for Syriza, the country will be ejected from the euro and untold catastrophes will follow.

Why are the European elites carrying out this unprecedented campaign, which strikes at the heart of the EU and would lead to outrage if the target were the British, the Italians, or the French? The reason is simple. If the Greeks vote a Syriza government into office, the EU and the IMF will have to drastically change the austerity policies that created an economic disaster and a humanitarian crisis.

The 6 May result saw Syriza’s share of the vote jump from 4% to 17%, while the New Democracy and Pasok parties, which had alternated in government with a combined 80% of the vote in the last 40 years, collapsed to 32%. On 7 May, the Europeans started admitting the Greeks have been punished disproportionately, and that austerity does not work and must be mitigated. On 17 June, a Syriza victory will be the first defeat of austerity in Europe and will have international repercussions.

The belated admission by the IMF and EU “experts” that austerity does not work is a direct result of the 6 May results. The figures are staggering: more than 20% contraction of output over four years; 22% unemployment and 54% youth unemployment; a 24-point jump in the poverty index; and a 50% reduction in the salaries and pension of civil servants. The second memorandum moved to the private sector, abolishing collective bargaining and other basic labour law protections, as well as cutting the minimum wage and unemployment benefits by up to 32%.

The Guardian has documented the humanitarian catastrophe that followed. Soup kitchens for the middle class, a huge jump in homelessness and mental disease, daily suicides, lack of basic medicines, cancer patients turned away from pharmacies, and hospitals ceasing operation because of a lack of basic supplies. The question on Sunday is not between the euro and the drachma, but between the continuation of these policies or salvation from the greatest destruction a people have experienced in peacetime. If something is leading to the exit from the euro, a probable collapse of the eurozone and a possible world crisis of 1930s magnitude, is not the Syriza policies but extreme austerity and mad economic recipes. [Continue reading…]