Just as much as life is threatened by the loss of species and degradation of habitats, humanity suffers irreparable loss each time a language disappears — one language dies every 14 days.

Along with each of those languages, a way of understanding the world is also lost. For instance, the speakers of Tuvan, of whom fewer than 250,000 remain, have a radically different way of viewing time. Songgaar means future, but it also means go back. Burungaar means past and also go forward. We can see the past; it is known and thus we face it. We cannot see the future; it is unknown, out of sight and thus ‘behind’ us. 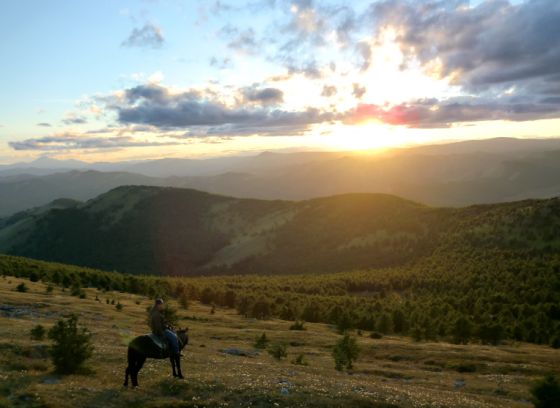 The Republic of Tuva

Russ Rymer writes: One morning in early fall Andrei Mongush and his parents began preparations for supper, selecting a black-faced, fat-tailed sheep from their flock and rolling it onto its back on a tarp outside their livestock paddock. The Mongush family’s home is on the Siberian taiga, at the edge of the endless steppes, just over the horizon from Kyzyl, the capital of the Republic of Tuva, in the Russian Federation. They live near the geographic center of Asia, but linguistically and personally, the family inhabits a borderland, the frontier between progress and tradition. Tuvans are historically nomadic herders, moving their aal — an encampment of yurts — and their sheep and cows and reindeer from pasture to pasture as the seasons progress. The elder Mongushes, who have returned to their rural aal after working in the city, speak both Tuvan and Russian. Andrei and his wife also speak English, which they are teaching themselves with pieces of paper labeled in English pasted onto seemingly every object in their modern kitchen in Kyzyl. They work as musicians in the Tuvan National Orchestra, an ensemble that uses traditional Tuvan instruments and melodies in symphonic arrangements. Andrei is a master of the most characteristic Tuvan music form: throat singing, or khöömei.

When I ask university students in Kyzyl what Tuvan words are untranslatable into English or Russian, they suggest khöömei, because the singing is so connected with the Tuvan environment that only a native can understand it, and also khoj özeeri, the Tuvan method of killing a sheep. If slaughtering livestock can be seen as part of humans’ closeness to animals, khoj özeeri represents an unusually intimate version. Reaching through an incision in the sheep’s hide, the slaughterer severs a vital artery with his fingers, allowing the animal to quickly slip away without alarm, so peacefully that one must check its eyes to see if it is dead. In the language of the Tuvan people, khoj özeeri means not only slaughter but also kindness, humaneness, a ceremony by which a family can kill, skin, and butcher a sheep, salting its hide and preparing its meat and making sausage with the saved blood and cleansed entrails so neatly that the whole thing can be accomplished in two hours (as the Mongushes did this morning) in one’s good clothes without spilling a drop of blood. Khoj özeeri implies a relationship to animals that is also a measure of a people’s character. As one of the students explained, “If a Tuvan killed an animal the way they do in other places”—by means of a gun or knife — “they’d be arrested for brutality.”

Tuvan is one of the many small languages of the world. The Earth’s population of seven billion people speaks roughly 7,000 languages, a statistic that would seem to offer each living language a healthy one million speakers, if things were equitable. In language, as in life, things aren’t. Seventy-eight percent of the world’s population speaks the 85 largest languages, while the 3,500 smallest languages share a mere 8.25 million speakers. Thus, while English has 328 million first-language speakers, and Mandarin 845 million, Tuvan speakers in Russia number just 235,000. Within the next century, linguists think, nearly half of the world’s current stock of languages may disappear. More than a thousand are listed as critically or severely endangered — teetering on the edge of oblivion. [Continue reading…]

1 thought on “What is lost when a language goes silent?”