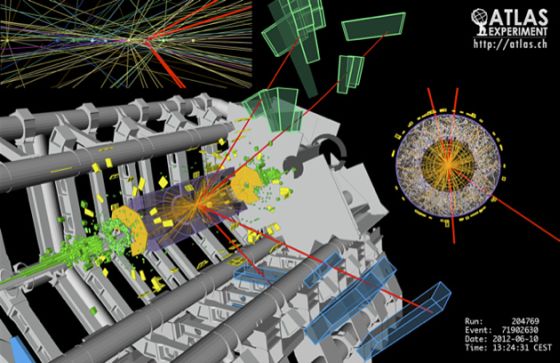 'The search is more advanced today than we imagined possible,' said ATLAS spokesperson Fabiola Gianotti. 'We observe in our data clear signs of a new particle, at the level of 5 sigma, in the mass region around 126 GeV. The outstanding performance of the LHC and ATLAS and the huge efforts of many people have brought us to this exciting stage. A little more time is needed to finalize these results, and more data and more study will be needed to determine the new particle’s properties.'

Wired Science reports: Prepare the fireworks: The discovery of the Higgs boson is finally here. Early in the morning on July 4, physicists with the Large Hadron Collider at CERN announced they have found a new particle that behaves similarly to what is expected from the Higgs.

“As a layman, I would now say, I think we have it,” said CERN director-general Rolf-Dieter Heuer. “It’s a historic milestone today. I think we can all be proud, all be happy.” Both CMS and ATLAS, the two main LHC Higgs-hunting experiments, are reporting a boson that has Higgs-like properties at a mass of 125 gigaelectronvolts (GeV) with a 5-sigma significance, meaning they are 99.999 percent confident of its existence.

At the first mention of 5-sigma by physicist Joe Incandela, who presented results from one of the main Higgs-searching efforts at the LHC, the audience burst into applause. “It was really a magnificent moment to see the reaction from the community,” he said later in a question and answer session. “Emotionally it didn’t really hit me until today because we have had to be so focused, and so much work to do.”

Though CERN scientists are making sure to be cautious about over-interpreting their data, the results are impressive and historic, and today will likely go down as the day the Higgs discovery was announced.

“This boson is a very profound thing that we have found. This is not like other ordinary particles,” Incandela said. “We are reaching into the fabric of the universe like we’ve never done before. It’s a key to the structure of the universe.”

First hypothesized in the 1960s, the Higgs boson is the final piece of the Standard Model, the physics framework explaining the interactions of all known subatomic particles and forces. The Higgs has been the subject of an extensive two-decade search, first at the European Large Electron-Positron Collider, then the Tevatron at Fermilab in Illinois, and finally at the LHC. Finding the Higgs within the predicted energy range is a major vindication for the Standard Model. 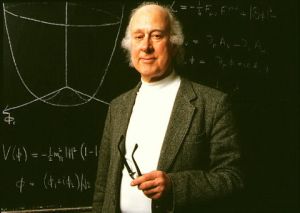 “I never expected this to happen in my lifetime and shall be asking my family to put some champagne in the fridge,” physicist Peter Higgs, the particle’s namesake who first theorized the existence of the particle, said in a statement.

The Higgs is certainly the most important discovery in the field for a generation. The last of the Standard Model’s 16 particles to be found was the top quark, discovered at Fermilab’s Tevatron in 1995, while many physicists would point to the detection of the W and Z boson in 1983 as the field’s most recent monumental finding. And considering that it is gives rise to the mass of all other particles, the Higgs may well be the most important new particle found for years to come.

Discovering the Higgs boson is not likely to radically change life for most people — it will not lead to better communications devices or fancy new electronics. But knowing its characteristics will bring physicists a better understanding of nature. The Higgs is important because it is the manifestation of the Higgs field, which is thought to permeate all of space and interact with all other subatomic particles. This interaction leads to the different mass for each elementary particle. Some particles, like protons, are slowed by this field, like a tennis ball going through molasses, and are relatively heavy while others, like electrons, shoot rapidly through like BB gun pellets, making them light.

Phys.org explains: A Higgs boson is an excitation – a fleeting, grainy representation – of the Higgs field, which extends throughout space and gives all other particles their mass.

At the instant of the big bang, everything was the same as everything else, a state of symmetry that lasted no time and was immediately broken. Particles of matter called fermions emerged from the sea of energy (mass and energy being interchangeable), including quarks and electrons that would much later form atoms. Along with them came force-carrying particles called bosons to rule how they all were related. All had different masses – sometimes wildly different masses.

Using the concepts of a Higgs field and Higgs boson, the Standard Model explains why quarks, protons, electrons, photons, and a wide-ranging zoo of other particles have the specific masses they do. Oddly, however, the Standard Model can’t predict the mass of the Higgs itself. That will only be learned from experiment.

The following animation explains the Higgs boson. (The very noisy intro in the CERN cafeteria only lasts about 40 seconds.)