Following Al Jazeera‘s report that Yasser Arafat may have been killed by polonium poisoning, I thought it was worth reviewing some of the scientific literature on this subject.

In the World Journal of Nuclear Medicine 2007, Vol 6, Number 2, p. 102-106, Alan C Perkins, Professor of Medical Physics at the University of Nottingham, describes the effects on ingesting polonium-210:

Human data on the biological effects of Po-210 are limited (2,3). There are a few recorded events implicating the toxic nature of polonium poisoning starting with the death of Nobus Yamada in 1927 after working with polonium in Marie Curie’s lab. Irene Curie died of leukaemia in 1956. During World War II Dr Robert Fink of the University of Rochester gave Po-210 water to a patient with myeloid leukaemia and 4 others as part of a medical experiment. The cancer patient died the other 5 individuals survived. In the years following the Second World War physicist Dror Sedah working with Po-210 on Israel’s nuclear program reported widespread contamination on everything he touched in his lab and his home. One of his students subsequently died of leukaemia. There is one reported case of a Russian male worker who accidentally inhaled an aerosol estimated to contain approximately 530MBq of Po-210. The total retention was estimated as being approximately 100MBq, with 13.3MBq in the lungs,4.5MBq in the kidneys and 21MBq in the liver. At the time of admission to hospital 2 to 3 days after ingestion the patient had a fever and severe vomiting, but no diarrhea. He died after 13 days. Anyone receiving such doses would show symptoms of acute radiation sickness syndrome with bone marrow failure. About 5% of Po-210 reaching the blood will be deposited in the bones. Subsequent damage to the liver and kidneys will contribute to death from multiple organ failure. Remedial medical treatment strategies are considered to be unsuccessful within a few hours of ingestion, once significant amounts of Po-210 have entered the blood stream and deposited in tissues.

Weight for weight Po-210 is a million times more toxic than hydrogen cyanide. A microgram, (no larger than a speck of dust), would deliver a fatal dose of radiation. The maximum safe body burden of Po-210 is only seven picograms. Following ingestion Po-210 has a biological half-life of 50 days. Approximately 10% is absorbed from the gut into the blood. Once within the bloodstream it is rapidly deposited in major organs and tissues including the liver, kidneys and bone marrow as well as the skin and hair follicles (Figure 2). Approximately 5% is deposited in bone. The intense alpha radiation within these tissues results in massive destruction of cells, leading to a rapid decline in health. Animal studies have shown that 0.1-0.3GBq or greater of Po-210 absorbed into the blood of an adult male is likely to be fatal within 1 month (2). This corresponds to ingestion of 1-3GBq or greater assuming 10% gastrointestinal absorption to blood. Remedial medical treatments are considered unhelpful within a few hours following ingestion! 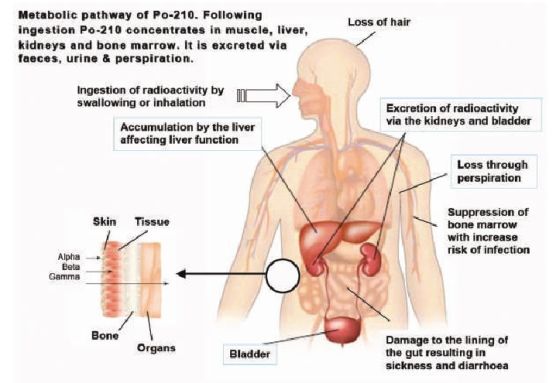 4 thoughts on “The effects of polonium poisoning”