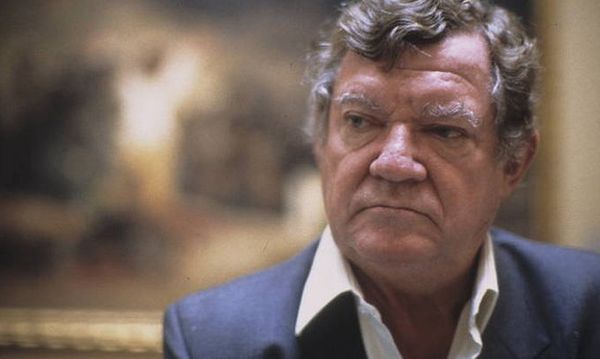 Ken Tucker writes: Robert Hughes, not only one of the greatest art critics, but one of the greatest critics in any medium, has died. He was 74. The Australian-born Hughes was the art critic for Time Magazine starting in 1970, the author of the bestselling history of Australia, The Fatal Shore, and was the writer, producer, and star of one of the finest television documentaries ever aired: The Shock of the New, first broadcast in 1980.

Hughes had a rugged pug face, a resonant voice that could hypnotize you when he narrated or lectured, and was a fiercely combative critic with strong opinions about beauty, the art market, and artists’ technical skills. He had little use for an awful lot of modern art, or what he describes here, in a clip from Shock of the New, as stuff such as “a videotape of some twit from the University of Central Paranoia”:

First broadcast by the BBC and in this country on PBS, The Shock of the New was, for me, a shock on a couple of levels. I’d never seen such a forcefully argued documentary on television; I’d never heard art explained with such clarity; I’d never felt such joy absorbing invective mingled with praise emanating from such a curt, dashing fellow.

What Hughes demonstrated so effectively was that television, in the right hands (which might not be easy to find), was a medium with a much greater capacity than to merely entertain; that it could cultivate and express intelligence. Unfortunately, that capacity has never much overlapped with its even greater capacity: to turn a profit and exploit the tradable value of stupidity.

Here’s the first episode of The Shock of the New. Don’t be put off by the cheesy synthesized music accompanying the titles — in those days the state-funded BBC worked on a tight budget.

Peter Coster writes: Robert Hughes took a long time dying. Not in the Calvary Hospital in New York on Monday. That was the end of a road bearing a cross he carried from a near-fatal car crash in Western Australia.

It was as he lay broken in the wreckage 13 years ago that the art critic and historian first saw death.

This brilliant son of a transplanted Irish Catholic family that achieved so much in Australia saw Death “sitting at a desk like a banker. He made no gesture, but he opened his mouth and I looked right down his throat, which distended to become a tunnel”.

Hughes said it led to the inferno of old Christian art.

He was grievously hurt in that car crash on what seemed an empty road in the Outback when his car and another somehow collided. Had they not seen each other? Were the drivers drunk?

Close to death, on life support, Hughes endured many operations. Catholics never escape their Catholicism, and Hughes thought he experienced a descent into hell as he lay in the wreckage of his car, his flesh torn by demons.

A handsome, powerful hunk of a human being, he was reduced to a shambling wreck as he staggered on over the next 13 years to die, like Christ at Calvary.

The analogy would not have escaped him, knowing the hospital in the Bronx was where life was likely to end.

He had limped away from Australia on sticks, but as always he returned to the country that made him and of which he wrote with such honest clarity.

Australia, too, came from a hell in its convict past, as Hughes wrote in The Fatal Shore, his history of the beginnings of Australia as a convict settlement that was born anew.

Hughes was not some effete to turn his nose away from the taint of the past. But Australia was also a place he had to leave to understand by seeing the world. It was also why he returned.

He hated the Australia that hurt him, but he recovered, though not from his wounds.

The flesh was weak, but the spirit still strong. He was a crumbling figure, a broken Toby Jug, when he was signing his book on the tempestuous Spanish artist Goya while speaking at a Melbourne art gallery.

I asked what he thought of the tens of millions of dollars being splashed then by hedge-fund manipulators and art ignoramuses on the great paintings of the world.

He was in pain, not entirely from his injuries. His great head shook. His cheeks reddened. He described the billionaire buyers of art as investment as “raw” people. He might have been talking about meat. He roared that putting great art before them was “like putting a bucket of blood in front of a pack of dingoes”.