It’s no wonder that the fiction of the self-made man has deep roots in American culture. A society built on the land of indigenous people and on backs of African slaves needs to find ingenious ways to dignify itself. The myth of self-creation has an obvious appeal as it negates the past and glorifies the future.

In 1624, when John Donne wrote, “No man is an island,” he merely eloquently phrased what throughout human existence had always been understood. Yet in 21st century America a debate continues between those who exalt autonomy versus those who emphasize human interdependence.

Eric Michael Johnson writes: Black-and-white colobus monkeys scrambled through the branches of Congo’s Ituri Forest in 1957 as a small band of Mbuti hunters wound cautiously through the undergrowth, joined by anthropologist Colin Turnbull. The Mbuti are pygmies, about 4 feet tall, but they are powerful and tough. Any one of them could take down an elephant with only a short-handled spear. Recent genetic evidence suggests that pygmies have lived in this region for about 60,000 years. But this particular hunt reflected a timeless ethical conflict for our species, and one that has special relevance for contemporary American society. 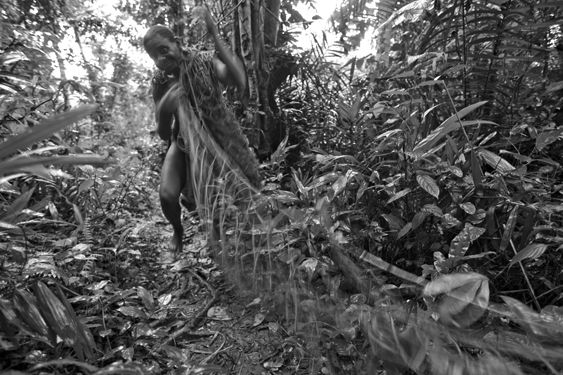 The Mbuti employed long nets of twined liana bark to catch their prey, sometimes stretching the nets for 300 feet. Once the nets were hung, women and children began shouting, yelling, and beating the ground to frighten animals toward the trap. As Turnbull came to understand, Mbuti hunts were collective efforts in which each hunter’s success belonged to everybody else. But one man, a rugged individualist named Cephu, had other ideas. When no one was looking, Cephu slipped away to set up his own net in front of the others. “In this way he caught the first of the animals fleeing from the beaters,” explained Turnbull in his book The Forest People, “but he had not been able to retreat before he was discovered.” Word spread among camp members that Cephu had been trying to steal meat from the tribe, and a consensus quickly developed that he should answer for this crime.

At an impromptu trial, Cephu defended himself with arguments for individual initiative and personal responsibility. “He felt he deserved a better place in the line of nets,” Turnbull wrote. “After all, was he not an important man, a chief, in fact, of his own band?” But if that were the case, replied a respected member of the camp, Cephu should leave and never return. The Mbuti have no chiefs, they are a society of equals in which redistribution governs everyone’s livelihood. The rest of the camp sat in silent agreement.

Faced with banishment, a punishment nearly equivalent to a death sentence, Cephu relented. “He apologized profusely,” Turnbull wrote, “and said that in any case he would hand over all the meat.” This ended the matter, and members of the group pulled chunks of meat from Cephu’s basket. He clutched his stomach and moaned, begging that he be left with something to eat. The others merely laughed and walked away with their pound of flesh. Like the mythical figure Atlas from Greek antiquity, condemned by vindictive gods to carry the world on his shoulders for all eternity, Cephu was bound to support the tribe whether he chose to or not.

Meanwhile, in the concrete jungle of New York City, another struggle between the individual and the group was unfolding. In October of 1957, Ayn Rand published her dystopian novel Atlas Shrugged, in which a libertarian hero named John Galt condemns his collectivist society because of its failure to support individual rights. “By the grace of reality and the nature of life, man — every man — is an end in himself,” Galt announced, “he exists for his own sake, and the achievement of his own happiness is his highest moral purpose.” Unlike Cephu, Galt had the means to end his societal bondage. By withdrawing his participation and convincing others to do the same, he would stop the motor of the world. Atlas would shrug. “Every living species has a way of survival demanded by its nature,” Galt insisted. “I swear by my life, and my love of it, that I will never live for the sake of another man, nor ask another man to live for mine.”

Ayn Rand’s defense of a human nature based on rationality and individual achievement, with capitalism as its natural extension, became the rallying cry for an emerging libertarian stripe in conservative American politics. Paul Ryan cites Atlas Shrugged as forming the basis of his value system and says it was one of the main reasons he chose to enter politics. Other notable admirers include Rush Limbaugh, Alan Greenspan, Clarence Thomas, as well as Congressional Tea Party Caucus members Steve King, Mick Mulvaney, and Allen West.

“Collectivism,” Rand wrote in Capitalism: The Unknown Ideal, “is the tribal premise of primordial savages who, unable to conceive of individual rights, believed that the tribe is a supreme, omnipotent ruler, that it owns the lives of its members and may sacrifice them whenever it pleases.” An objective understanding of “man’s nature and man’s relationship to existence” should inoculate society from the disease of altruistic morality and economic redistribution. Therefore, “one must begin by identifying man’s nature, i.e., those essential characteristics which distinguish him from all other living species.” She identifies two: a brain evolved for rational thought and a survival instinct based on the desire for personal freedom.

Ultimately, Rand was searching for the origin of John Galt in the pages of human nature. But was she right? Are we rational egotists trapped in a net of social obligations? Or are we an innately social species for whom altruism was integral to our success on this planet? There was only one place she could look: the Pleistocene. [Continue reading…]

3 thoughts on “The myth of freedom through autonomy”