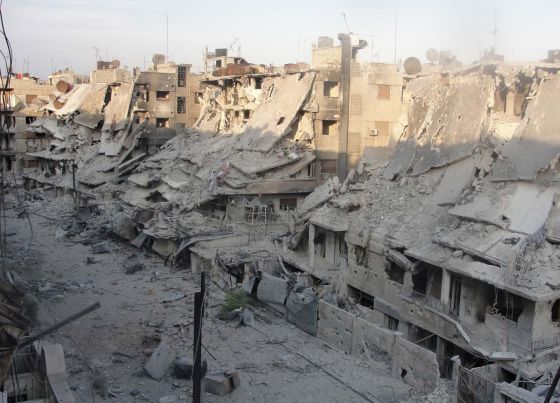 President Bashar al-Assad: 'The problem is that those terrorists are fighting from within the cities, and in the cities you have civilians. When you fight this kind of terrorists, you have to be aware that you should do the minimum damage to the infrastructure and minimum damage to the civilians because you have civilians and you have to fight, you cannot leave terrorists just killing and destroying. So, this is the difficulty in this kind of war. ' Photo: Homs, October 7, 2012

This is part of George Bush’s legacy: Bashar al-Assad’s war on terrorism.

“Terrorism” has become the glue that binds together global leaders of almost every political persuasion.

There is no civil war in Syria, no revolution or armed uprising — there are simply “terrorists” foreign and domestic who are serving as proxies for the powers the have ganged up against and demonized the Syrian president, a modest man who only holds power because this is the will of the people.

There might not be too many journalists willing to go along with this narrative, but Russia Today not only provided an interviewer willing to echo Assad’s claim that his enemy is terrorism — Sophie Shevardnadze wanted to know: “how much time do you need to crush the enemy?”