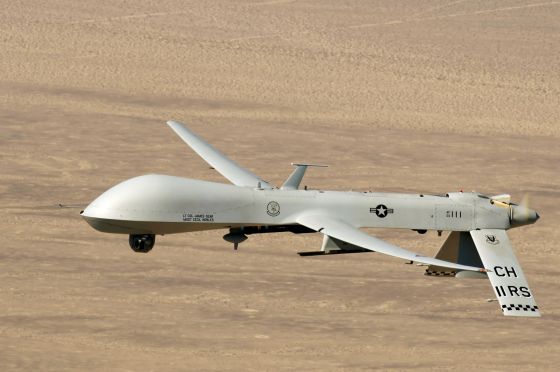 Suppose Iranian drones were spotted flying in international airspace close to New York City and U.S. air force jets were sent to intercept them. Would the drones simply be kept under surveillance so long as they remained outside U.S. territory? Or might warning shots be fired? Or might they simply be shot down?

Whichever of those outcomes transpired, no one would be in any doubt about who was being confrontational: the Iranians. And if shots were fired by Americans, their action would be described defensive.

Similarly, when U.S. drones operate just a few miles outside Iranian air space, it’s clear who is being confrontational — at least it’s clear unless you happen to be a reporter covering the Pentagon.

CNN’s Barbara Starr, who treats the word of Pentagon officials as gospel, wrote: “But as one of the officials said, ‘it doesn’t matter, they fired on us.'”

Since the claim was that of an official, not the observation of the reporter herself, she should have described the official’s assertion as that: a claim that it makes no difference what the Iranian’s intended.

But since it’s neither the job of Pentagon spokesmen nor reporters to attempt to read the minds of Iranian pilots, then it’s better to stick with the facts.

U.S. drones were operating just outside Iranian air space and Iranian jets fired shots. The purpose of the shooting is unknown but we do know that the CIA has previously operated a fleet of surveillance drones inside Iran and famously lost one.

The shooting, which the Pentagon said occurred Nov. 1 — five days before the American presidential election — was the first known instance of Iranian warplanes firing on an American surveillance drone.

George Little, the top Pentagon spokesman, attributed the weeklong silence on the incident to restrictions on discussing classified surveillance missions. But it doubtless will raise questions about whether that silence had been meant to forestall an international controversy before the election. Had a decision been made to officially disclose the shooting, it might have been viewed as a provocative or even partisan political act before the voting.

What none of the Pentagon reporters are willing to consider is that the operation of the drone was itself an act of provocation and that if the Iranians merely fired warning shots this indicated that they were not eager to rise to the bait.

The idea that the U.S. or Israel might actively attempt to trigger a war with Iran is not simply an obsession of those observers who persistently warn about “false flag” operations. It was one of the U.S. navy’s own top political advisers who in 2007 warned that Vice Adm. Kevin J. Cosgriff appeared to be intent on engineering a Tonkin Gulf type incident by sailing “three ‘big decks,’ as aircraft carriers are known, through the Strait of Hormuz — to put a virtual armada, unannounced, on Iran’s doorstep. No advance notice, even to Saudi Arabia and other gulf allies.”

It may indeed not matter whether the Iranians were firing warning shots or trying to bring down the unmanned aircraft; what matters more is why a drone was being flown in such a sensitive location right before the election.

1 thought on “Provocation above the Persian Gulf”