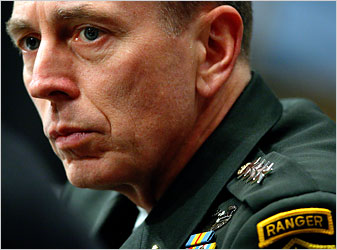 Michael Hastings writes: The fraud that General David Petraeus perpetrated on America started many years before the general seduced Paula Broadwell, a lower-ranking officer 20 years his junior, after meeting her on a campus visit to Harvard.

More so than any other leading military figure, Petraeus’ entire philosophy has been based on hiding the truth, on deception, on building a false image. “Perception” is key, he wrote in his 1987 Princeton dissertation: “What policymakers believe to have taken place in any particular case is what matters — more than what actually occurred.”

Yes, it’s not what actually happens that matters — it’s what you can convince the public it thinks happened.

Until this weekend, Petraeus had been incredibly successful in making the public think he was a man of great integrity and honor, among other things. Most of the stories written about him fall under what we hacks in the media like to call “a blow job.” Vanity Fair. The New Yorker. The New York Times. The Washington Post. Time. Newsweek. In total, all the profiles, stage-managed and controlled by the Pentagon’s multimillion dollar public relations apparatus, built up an unrealistic and superhuman myth around the general that, in the end, did not do Petraeus or the public any favors. Ironically, despite all the media fellating, our esteemed and sex-obsessed press somehow missed the actual blow job.

Before I lay out the Petraeus counter-narrative — a narrative intentionally ignored by most of the Pentagon press and national security reporters, for reasons I’ll soon explain — let me say this about the man once known as King David, General Betray-Us, or P4, by his admirers, his enemies, and his fellow service members, respectively. He’s an impressive guy, a highly motivated individual, a world-class bullshit artist, a fitness addict, and a man who spent more time in shitty places over the past 10 years than almost any other American serving his or her country has. I’ve covered him for seven years now, and he’ll always have my respect and twisted admiration.

So it’s fair to say that P4 probably deserves something a little better than the public humiliation he’s about to endure. Sources who long feared him have already begun to leak salacious details; one told me this weekend that he took Broadwell along with him on a government-funded trip to Paris in July 2011. And questions about his role in the Benghazi debacle are also likely to deepen.

And Broadwell, too, is about to get slandered in a way no woman deserves. She’s the Pentagon’s Monica Lewinksy — and, despite Team Petraeus’ much advertised lip service to courage and integrity, it didn’t take long for his allies to swarm the press with anonymous quotes smearing the West Point graduate and married mother of two: that she wore “tight clothes,” as The Washington Post reported, or that she had her “claws in him.” In other words, how could Old Dave have resisted that slut’s charms?

1 thought on “How Petraeus seduced America”