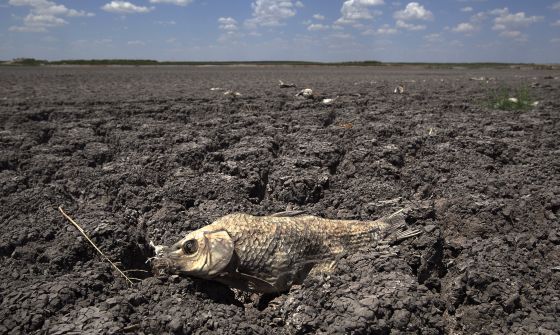 The remains of a carp in a dried out lake bed in San Angelo, Texas, August, 2011.

David Remnick writes: Barack Obama can take pride in having fought off a formidable array of deep-pocketed revanchists. As President, however, he is faced with an infinitely larger challenge, one that went unmentioned in the debates but that poses a graver threat than any “fiscal cliff.” Ever since 1988, when NASA’s James Hansen, a leading climate scientist, testified before the Senate, the public has been exposed to the issue of global warming. More recently, the consequences have come into painfully sharp focus. In 2010, the Pentagon declared, in its Quadrennial Defense Review, that changes in the global climate are increasing the frequency and the intensity of cyclones, droughts, floods, and other radical weather events, and that the effects may destabilize governments; spark mass migrations, famine, and pandemics; and prompt military conflict in particularly vulnerable areas of the world, including the Middle East, Southeast Asia, and sub-Saharan Africa. The Pentagon, that bastion of woolly radicals, did what the many denialists in the House of Representatives refuse to do: accept the basic science.

The economic impact of weather events that are almost certainly related to the warming of the earth—the European heat wave of 2003 (which left fifty thousand people dead), the Russian heat waves and forest fires of 2010, the droughts last year in Texas and Oklahoma, and the preëlection natural catastrophe known as Sandy—has been immense. The German insurer Munich Re estimates that the cost of weather-related calamities in North America over the past three decades amounts to thirty-four billion dollars a year. Governor Andrew Cuomo, of New York, has said that Sandy will cost his state alone thirty-three billion. Harder to measure is the human toll around the world—the lives and communities disrupted and destroyed.

“If we are willing to work for it, and fight for it, and believe in it,” Obama said, when he clinched the Democratic nomination in 2008, future generations will look back and say, “This was the moment when the rise of the oceans began to slow and our planet began to heal.” Those generations assuredly will not. Although Obama, unlike his predecessor, recognized the dimensions of the problem, he never pursued measures remotely equal to it. To his credit, his Administration has directed ninety billion dollars to investments in clean energy, and has secured several billion for energy-conservation upgrades; he got Detroit to agree to better gas-mileage standards, and finally introduced CO2 emission standards for commercial trucks and buses. For the most part, though, the accumulating crisis of climate change has been treated as a third-tier issue.

Last week, in his acceptance speech, Obama mentioned climate change once again. Which is good, but, at this late date, he gets no points for mentioning. The real test of his determination will be a willingness to step outside the day-to-day tumult of Washington politics and establish a sustained sense of urgency. There will always be real and consuming issues to draw his and the political class’s attention: a marital scandal at the C.I.A., a fiscal battle, an immigration bill, an international crisis. But, all the while, a greater menace grows ever more formidable. [Continue reading…]

3 thoughts on “The health of the planet must come first”