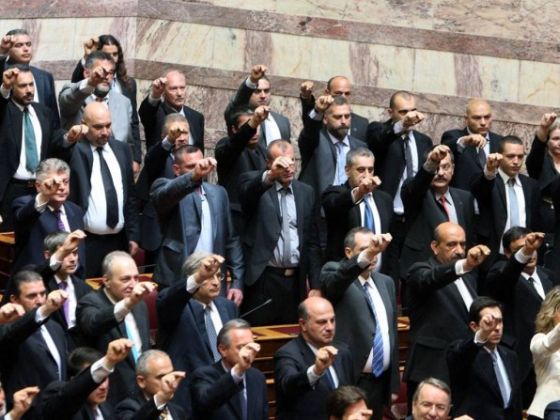 Reuters reports: Arm raised in a Nazi-style salute, the leader of Greece’s fastest-rising political party surveyed hundreds of young men in black T-shirts as they exploded into cheers. Their battle cry reverberated through the night: Blood! Honour! Golden Dawn!

“We may sometimes raise our hand this way, but these hands are clean, not dirty. They haven’t stolen,” shouted Nikolaos Mihaloliakos as he stood, floodlit, in front of about 2,000 diehard party followers filling an open-air amphitheatre at Goudi park, a former military camp near Athens.

“We were dozens, then a few hundred. Now we’re thousands and it’s only the beginning,” cried the leader of Golden Dawn, a far-right party that is seeing its support soar amid Greece’s economic collapse. Last month’s rally revealed the party, which describes itself as nationalist and pledges to expel all illegal foreigners, has a new-found sense of triumph, even a swagger, that some find menacing.

Riding a wave of public anger at corrupt politicians, austerity and illegal immigration, Golden Dawn has seen its popularity double in a few months. A survey by VPRC, an independent polling company, put the party’s support at 14 percent in October, compared with the seven percent it won in June’s election.

Political analysts see no immediate halt to its meteoric ascent. They warn that Golden Dawn, which denies being neo-Nazi despite openly adopting similar ideology and symbols, may lure as many as one in three Greek voters. [Continue reading…]