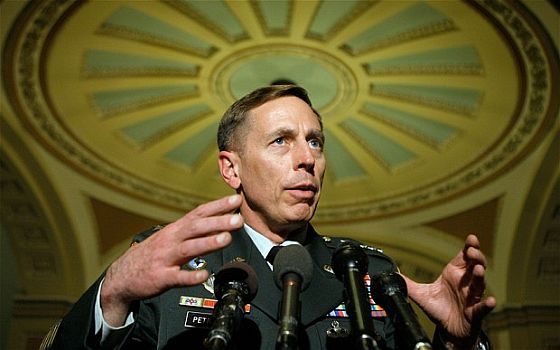 An article in the Daily Telegraph which focuses on Jill Kelley’s role as a hostess and prominent Tampa socialite reports:

Mrs Kelley, a mother-of-three and unpaid “social liaison” for the US military in Tampa, is said to have spared no expense at such parties to honour top brass stationed at nearby US Central Command. She was pictured at one event at her $1.2 million mansion in 2010 with Gen Petraeus, who arrived in a 28-man police motorcycle escort.

No wonder Petraeus has been dubbed King David.

If there’s a possible silver lining to this rather weird and icky cloud, it’s that these scandals might provoke a reevaluation of how the military treats its highest-ranking general officers. Today, many three and four stars are pampered like British royals – and we all know the kind of trouble those Windsors get themselves into.

“I worry about a creeping entitlement culture,” a former senior military officer tells Danger Room. “They’re so far removed from the daily realities – everything’s taken care of. There’s too many bells and whistles, too many perks,” says the former officer. “They’re ferried from place to place in black SUVs. Some of them have their own airplanes. Aides make their dinner reservations, get their clothes cleaned even cook their dinners. Many guys running big corporations aren’t living this large. And it all seems perfectly normal to them.”

Peeling away the entourages might bring some generals back down to the plane of mere mortals.

Americans have a very confused relationship with privilege. This country was founded as a republic because the idea anyone should be subject to rule under a monarch offended the conception that “all men are created equal.” But rather than completely rejecting the idea that some people can assume the right to rule over others, the preference has often seemed that “equality” can consist of common access to royal power. No one can be born a king but everyone can become a king. And thus presidents become invested with regal authority and the ability to start wars — not an actual legal right but a kind of cultural right that naturally belongs to whichever king currently rules from his white palace.