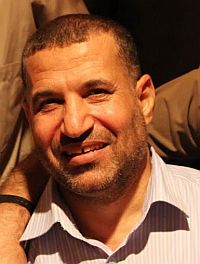 Haaretz reports: Ahmed Jabari, head of Hamas’ military wing, was killed Wednesday in a targeted strike by Israeli forces in the Gaza Strip.

The Palestinian Islamist group said an Israeli airstrike hit a car in the Gaza Strip, killing both Jabari, who ran the organization’s armed wing, the Izz el-Deen Al-Qassam, and a passenger.

Israel’s Shin Bet domestic intelligence service confirmed it had carried out the attack, saying it had killed Jabari because of his “decade-long terrorist activity.”

The incident appeared to end a 24-hour lull in cross-border violence that surged this week.

Jabari is the most senior Hamas official to be killed since an Israeli invasion of Gaza four years ago. He has long topped Israel’s most-wanted list.