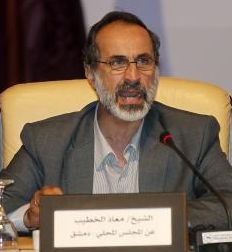 Robin Yassin-Kassab writes: Following my previous comment on the astounding failures of Syrian political elites, I must report some optimism. The Syrian National Council has accepted its place within the new Syrian National Coalition (it makes up a third of the new body), and the Coalition has won recognition by the Arab League, France, Japan and others.

The Coalition’s choice of leaders is the most inspiring sign, one which suggests both that the Coalition is no foreign front, and that another, much more positive aspect of Syria is finally coming to the fore.

President Ahmad Muaz al-Khatib is a mosque imam, an engineer and a public intellectual. He is Islamist enough for the Islamists and less extreme Salafists of the armed resistance to give him a hearing, but not Islamist enough to scare secularists and minority groups. He has written books on the importance of minority religious rights and women’s rights in a just Islamic society. His speeches since assuming his position have reached out to minorities and to the soldiers in Asad’s army, who he described as victims of the regime.

Vice President Riyadh Saif is a businessman, former MP, and a liberal democrat.

And Vice President Suheir al-Atassi, daughter of foundational Ba’athist Jamal al-Atassi, is a human rights activist, a secular feminist, a founder of the Syrian Revolution General Commission, and a key activist of the grassroots Local Coordination Committees. She is the sort of person who should have been representing the Revolution at the highest level from the very start. [Continue reading…]