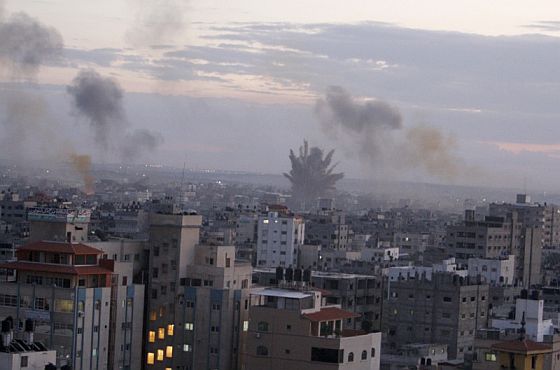 The Independent reports: Israeli troops massed on the Gaza border last night, poised for a possible ground invasion as Israel launched a major military operation it said was designed “to severely impair the command and control chain of the Hamas leadership, as well as its terrorist infrastructure.”

Military sources told The Independent that a ground invasion was “a distinct possibility”. The army has deployed extra infantry units near the Gaza border, halted major exercises, cancelled soldiers’ leave and mobilised some reserve forces.

Jerry Haber writes: All military actions, indeed, all actions having to do with Gaza, have one goal in mind: the subjugation of the Palestinian people there with minimum cost to Israel. In hasbara speak this is called “protecting Israelis,” “defeating terror,” “defending national security,” even “protecting national honor,” but it boils down to the same thing — Israel cannot be secure if the Palestinians have real independence. That is why Israelis are divided into those who want to subjugate Palestinians by giving them no self-determination and those who want to subjugate them by giving them quasi self-determination in a quasi-state.

I spoke with an expert on the Israeli military shortly after “Operation Cast Lead,” and when I told him that many argued that the operation was a reaction to Hamas rocket-fire, he laughed. He said that Hamas rocket-fire was deliberately provoked when Israel broke the cease-fire so that Israel could do a little “spring cleaning,” deplete Hamas’s arsenal of weapons. He told me that this happens every few years, and that I should expect it to happen in another few years. Israel will assassinate a Hamas leader, Hamas will have to respond (wouldn’t Israel, under those circumstances?) and Israel will perform a “clean up” operation. If Hamas is smart and doesn’t play into Israel’s hands, then Israel will also come out ahead, because it will be weakened in the eyes of the Palestinian public. It’s win-win for Israel. That’s what having control means.

Ynet reports: On Wednesday, US President Barack Obama spoke to Prime Minister Benjamin Netanyahu and Egyptian President Mohamed Morsi and reiterated US support for Israel’s right to self-defense in light of rocket attacks from Gaza, the White House said.

“The President urged Prime Minister Netanyahu to make every effort to avoid civilian casualties. The two agreed that Hamas needs to stop its attacks on Israel to allow the situation to de-escalate,” the statement said.

“The two leaders agreed to stay in close touch in the coming days. Earlier today, Vice President Biden received a briefing from Prime Minister Netanyahu on the events in Gaza,” the statement noted.

“The President also spoke with President Morsi given Egypt’s central role in preserving regional security. In their conversation, President Obama condemned the rocket fire from Gaza into Israel and reiterated Israel’s right to self-defense,” it said.

United Nations Secretary-General Ban Ki-moon called for an “immediate de-escalation of tensions.” In a statement, Ban said that “Both sides should do everything to avoid further escalation and they must respect their obligations under international humanitarian law to ensure the protection of civilians at all times.”

MENA reports: The Muslim Brotherhood called for protests before major mosques nationwide on Thursday afternoon to demand that the Egyptian government sever diplomatic and trade ties with Israel.

The group also called for a rally at Al-Azhar Mosque following Friday prayers.

In a press release on Thursday, the Brotherhood described the Israeli assaults on Gaza as “crimes” and said the aggression threatens regional stability. It also criticized the US for supporting Israel and blamed Arab countries for “doing nothing while watching the bloodshed in Palestine.”

“Work would resume on both sides of the border in order to be ready for the arrival of any injured Palestinians so they could be transferred to Arish Public Hospital, which is ready to receive them,” the source said.

IMEU provides a timeline on Israel’s latest escalation in Gaza.

1 thought on “Massed Israeli troops poised for invasion of Gaza”