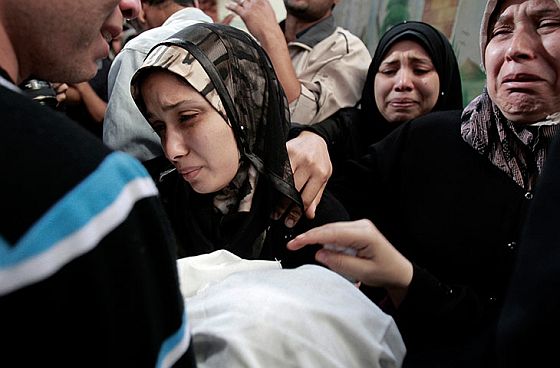 The parents of an 11-month-old child, Omar Misharawi, killed in an Israeli strike hold his body at his funeral in Gaza City.

Rabbi Brant Rosen writes: Israel’s military assault on Gaza in 2008-09 represented an important turning point in my own relationship with Israel. I recall experiencing a new and previously unfamiliar feeling of anguish as Israel bombarded the people living in that tiny, besieged strip of land over and over, day after day after day. While I certainly felt a sense of tribal loyalty to the Israelis who withstood Qassam rocket fire from Gaza, I felt a newfound sense of concern and solidarity with Gazans who I believed were experiencing nothing short of oppression during this massive military onslaught.

And now it’s happening again. Only this time I don’t think the term “anguish” quite fits my mindset. Now it’s something much closer to rage.

It’s happening again. Once again 1.7 million people, mostly refugees, who have been living in what amounts to the world’s largest open air prison, are being subjected to a massive military assault at the hands of the world’s most militarized nation, using mostly US-made weapons. And our President is not only looking on – he is defending Israel’s onslaught by saying it has a right to “self-defense in light of the barrage of rocket attacks being launched from Gaza against Israeli civilians.”

No, this is just the latest chapter of a much longer saga that began in 1947-48, when scores of Palestinians were ethnically cleansed from their cities and villages in the coastal plain and lower Galilee and warehoused in a tiny strip of land on the edge of the Mediterranean. [Continue reading…]