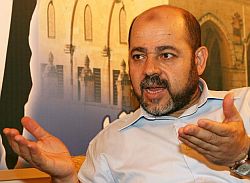 Mousa Abu Marzook, Deputy Chairman of the Hamas Political Bureau, writes: The latest Israeli aggression on the Gaza Strip has prompted several European countries and the US to reaffirm their position of unwavering support for the aggressor. William Hague, Britain’s foreign secretary, Cathy Ashton, the EU high representative for foreign affairs, and Barack Obama, have all claimed that Hamas’s rockets were responsible for the crisis and that it is the right of Israel to defend its citizens. Had they checked the facts, they would have realised Israel started the attacks. The escalation started when an Israeli military incursion into Gaza on 8 November killed a Palestinian child. That was followed by other Israeli incursions and attacks, provoking a response by Palestinian factions.

Despite that, there were serious efforts to calm the situation and reach a truce. But clearly Israel had another agenda. By targeting Ahmed al-Jabari, leader of the al-Qassam Brigade, it sabotaged Egyptian efforts to conclude a truce between all Palestinian factions and the Israelis. This was confirmed by Egypt’s president on Saturday.

With the approach of the Israeli elections, the Israeli prime minister, Binyamin Netanyahu, wanted to trade with the blood of the Palestinians, especially after his alliance with the ultra-extremist Avigdor Lieberman failed to boost his popularity in the polls as he’d expected. This is not the first time the Israelis have launched a war for electoral gain. Shimon Peres did it to Lebanon in 1996 and the Olmert-Livni-Barak alliance did it to Gaza in 2008. What is important here is the immoral and short-sighted stance of the European and US governments; they have misconstrued the facts and displayed complete partiality in favour of the aggressor.

The western position has given political cover to the Israeli aggression and encouraged its leadership to continue their attacks. Thus, in the eyes of our people and those of the entire region, western countries are complicit. European governments, in contrast to their peoples whose majority support Palestinian rights, have demonstrated their double standards and hypocrisy again.

The human rights that Europe claims to defend all over the world are denied to the Palestinian people. European governments have done nothing while 1.7 million Gazans have been subjected for the past five years to an Israeli blockade – denying them food, water, medicine and even determining how many calories they should be allowed each day.

The right of people to resist occupation and confront aggression is guaranteed to all peoples; but if Palestinians seek to exercise this right it immediately becomes terrorism and for this they must be persecuted. [Continue reading…]