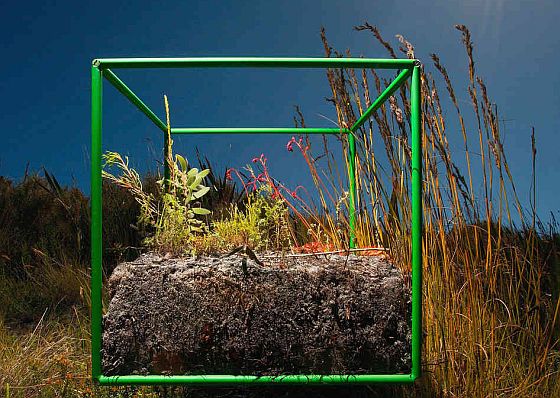 To see a world in a grain of sand
And a heaven in a wild flower,
Hold infinity in the palm of your hand,
And eternity in an hour.

Thus William Blake’s Auguries of Innocence begins. The same insight — that in the smallest things we can discover the significance of life — has now been revealed (though not as poetically expressed) by a photographer who scoured the world examining life circumscribed by a cubic foot.

John Vidal writes: Long live the creepy crawlies, the bugs, the tiny wigglers and wrigglers, the minuscule parasites and nematodes, the mites and oribatids and all the myriad life forms that buzz, crawl and throb below our feet. Most have barely been given a second thought by science, but biologists now think that these mostly named creatures make up the beating heart of the biosphere and that the fate of all life may depend on the wellbeing of their fragile worlds.

Thanks to photographer David Liittschwager, we now have a visual inkling of what exactly lives high in the cloud forest canopy, below our feet in the parks, in the sediments of rivers and on coral reefs. Liittschwager, primarily a portrait photographer, had the idea of taking a one-cubic-foot metal frame and recording what moved through this habitat over the course of a day and night. He then made portraits of the life that could be seen with the naked eye.

What was found even in fairly nondescript places was wondrous. When the metal frame was dropped in the Duck river in Tennessee, it recorded 32 fish species, and nearly 100 others in the day. “Dig a few handfuls of sediment from the bottom and the river’s significance begins to reveal itself. Half of what you hold in your hands is sand and gravel, and the rest is live species – mussels, snails, juvenile crayfish, the larvae of stoneflies and dragonflies. It seems possible that the driving force of planetary life is actually very small and that its intricacies are lost on most of us,” author Alan Huffman remarks in an essay accompanying the pictures.

A whole, unknown world was found when the cube was suspended from the branch of a tree in Costa Rica’s rainforest. This time, 145 species – birds, mammals, mosses, bromeliads and epiphytes – were recorded. “This is the last biotic frontier, the missing pieces of the phenomenal jigsaw puzzle that is the tropical rainforest. How forest canopy populations become established, grow and disperse to other sites remains wholly unknown,” said canopy researcher Nalini Nadkarni.

The cubic foot was dropped on Temae coral reef near Tahiti in the Pacific. There, 600 individual animals and plants more than a millimetre in size – some living permanently in the space, others swimming or floating through – were recorded. “And this is not counting the many thousands of smaller creatures that floated by each hour. Wrasses, sea slugs, a baby octopus, shrimp, worms and crabs as small as the letters on the page were all recorded,” reported author Elizabeth Kolbert.

Jasper Slingsby, a researcher at the South Africa environmental observational network, recorded life in a cubic foot of Table mountain national park in South Africa. “In the course of 24 hours, the one cubic foot of mountain fynbos that we sampled revealed almost 30 plant species and roughly 70 invertebrates. But being stationary the cube could not capture what is arguably the most amazing component of fynbos diversity – how much it changes from location to location. If we picked the cube up and walked 10ft we could get as much as 50% difference in plant species we encountered. [Continue reading…]

NPR’s Robert Krulwich describes a Liittschwager-like experiment that his colleague, commentator and science writer Craig Childs, conducted in a cornfield in Iowa.

There were no bees. The air, the ground, seemed vacant. He found one ant “so small you couldn’t pin it to a specimen board.” A little later, crawling to a different row, he found one mushroom, “the size of an apple seed.” Then, later, a cobweb spider eating a crane fly (only one). A single red mite “the size of a dust mote hurrying across the barren earth,” some grasshoppers, and that’s it. Though he crawled and crawled, he found nothing else.

“It felt like another planet entirely,” he said, a world denuded.

Yet, 100 years ago, these same fields, these prairies, were home to 300 species of plants, 60 mammals, 300 birds, hundreds and hundreds of insects. This soil was the richest, the loamiest in the state. And now, in these patches, there is almost literally nothing but one kind of living thing. We’ve erased everything else.